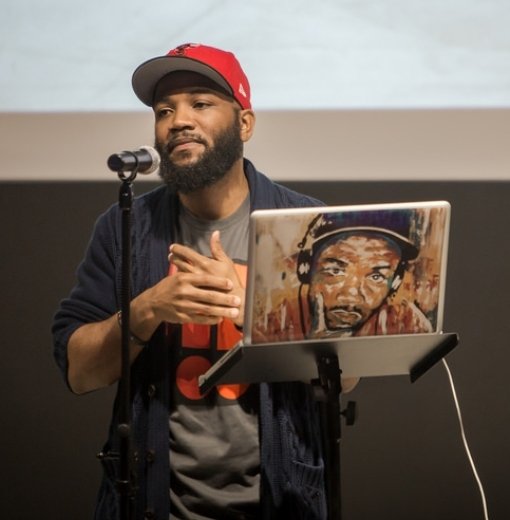 One year out from defending his unique and respected dissertation, A.D Carson is busy in the heart of Charlottesville as the newest Assistant Professor of Hip Hop at the University of Virginia.

The Clemson University graduate made headlines last year after word got out that his dissertation, was a 34-song rap album. Owning My Masters: The Rhetorics of Rhymes and Revolutions; delves into present racism in America, police brutality and killings, current issues and the state of our Union as we know it to be. Witty punch lines, provoking verses, thought out choruses and culturally relevant beats, make Owning My Masters worth all its hype.

In a sit down with Professor Carson, the Decatur Illinois born lyricist, states that his healthy relationship with words started with his mother making reading a privilege versus a punishment. Homework and house chores were to be done before reading and writing could ensue.

“I remember when I was really young, I mean young enough that I was reading and could really appreciate saying words aloud, my mom had these encyclopedias. They were like these heavy brown books with gold foiled writing on them and she would never let us touch the books unless we washed our hands and we also had all of our work were supposed to do, finished. I remember just being enamored with all of the information in those books.” Carson also says that poetry books given to him by his teachers helped him to find love for rhyming words. Circling the pages of his favorite poems that rhymed were fond memories of his.

Close to finishing his first year as one of the newest additions to the UVA Faculty, The Assistant Professor of Hip Hop and the Global South, is getting adjusted to the position and holding his own in the academic community. Knowing that Owning My Masters might spark some conversation, he still wasn’t sure where he’d land after defending the project or how big of a deal the project would be. “I didn’t have an idea of what kind of job I would do, I didn’t have an idea of the kind of engagements I would have with people afterwards…it’s been a really humbling experience.”

Carson states “For reality to match up to the expectation or your imagination about a thing, I think it’s kind of unexpected and it still seems unreal.”

Before arriving to Charlottesville in Spring of 2017, A.D was wrapped up in the work of creating his second album Sleep Walking Vol. 1 and engaging into the happenings of the Clemson South Carolina community. He says the line “Whirlwind and in the blink of an eye I appeared here,” from the album described his transition perfectly. The track g Not long after planting his feet here on the Cavalier soil, the Neo Nazi Rallies of August 12th took place. “Before I knew it I was living in Charlottesville and being asked if I wouldn’t mind delivering some remarks on the morning of August 12th.” Carson details that his Alma Mater’s community; is no stranger to racism and its own problems similarly to those of Charlottesville. In is new role however, he realizes that there was and is already work being done in small Virginia town.

Noting that the organizing that happens in the 40,000 plus college town, A.D explains that as a resident it’s important for him to be involved in any way possible.

One of very few Hip Hop professors in the country, Professor Carson’s role is groundbreaking and historical to say the least. Wanting to assist in the merge of Charlottesville the college town and Charlottesville’s rap scene; Cason reminisces on his time in Decatur Illinois where he says he was a member of multiple communities. “I always felt like I had one foot on either side of that divide. Being a student at that university and being a resident of that town and being a member of that community.”

“I step into this role understanding that the local hip hop artists need to be consulted, need to be present, need to be apart of what the university is doing. If hip-hop is going to do the kind of political work that we know that it has done and that it can do and that we hope that it will do in the future; that it has to speak to some sort of circumstances. Those circumstances are often the circumstances that are going on in that local space.”