After Black and minority businesses missed out on PPP, Biden-Harris seek to remedy

EXCLUSIVE: Black leaders commend the White House’s latest efforts to provide relief for Black and Brown business owners, but some are pushing for more

When COVID-19 hit in early 2020, the outcry was on a grand scale for minority businesses that were trying to stay in the black and keep their doors open. But when the help came in the form of the Payment Protection Program (PPP) the distribution of the financial rescue was not equitable.

The Trump administration’s efforts to correct the imbalance in funding came during the second wave of business rescue help. By then many Black and minority-owned companies had to shut their doors.

With that said, the Biden administration is changing how PPP is administered and is offering equitable access to relief.

“There are 30 million business in America. Just under 10 percent of those are Black businesses. 96 percent of all Black businesses don’t have an employee — they are sole proprietors,” Bryant tells theGrio. “There is no infrastructure. PPP doesn’t necessarily apply to them under the traditional rules.”

One of the bullet points of the Biden plan is crucial to a large portion of Black-owned businesses, and that is revising the loan calculation formula used to determine PPP loans. As the Biden-Harris administration points out, sole proprietors, independent contractors and self-employed individuals who are without employees are 70 percent owned by women and people of color.

Despite this fact, “many are structurally excluded from the PPP or were approved for as little as $1 because of how PPP loans are calculated,” says Braynt.

Bryant is supportive of all the bullet points. However, he is pushing for more. He has been working with the Trump and the Biden Treasury Departments on efforts to help meet the need of Black and Brown businesses.

Lisa Rice of the National Fair Housing Association began working with Congressional leaders in March 2020 on the Cares Act to remove barriers and warned that businesses owned by people of color would not get access due to systemic barriers. Rice also warned of the credit invisibility for business owners of color. She was right as the effort to fix the issue is happening now. 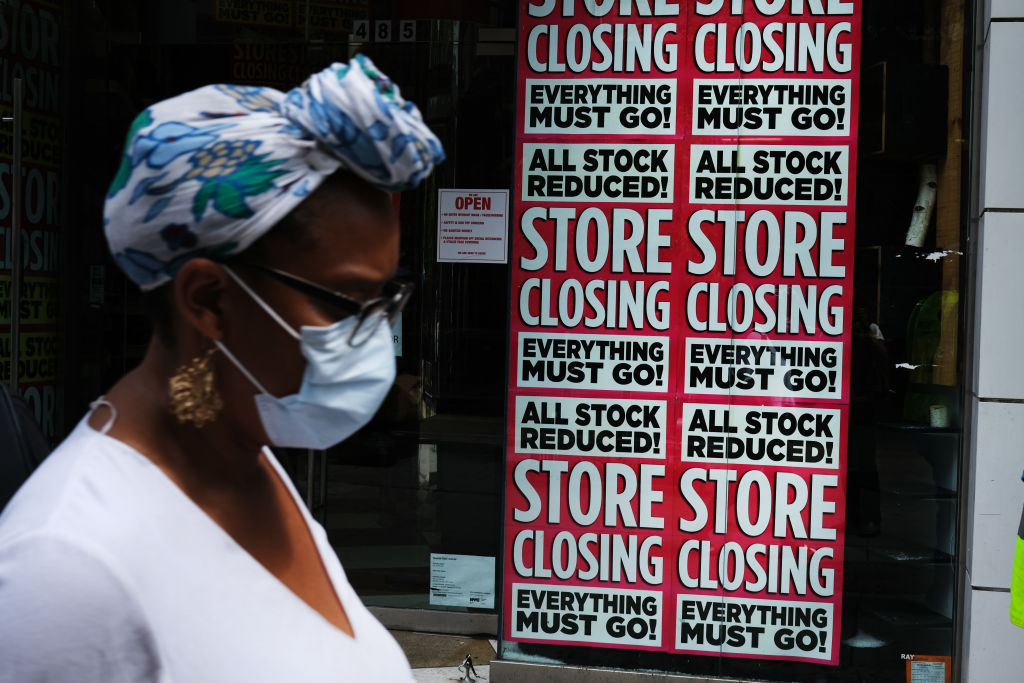 A store advertises a sale on July 07, 2020 in the Brooklyn borough of New York City. (Photo by Spencer Platt/Getty Images)

“We have long argued that structural barriers were impeding the ability of people of color to tap into these critical funding opportunities and I’m grateful the Biden administration gets it,” Rice tells theGrio.

“Systemic roadblocks — like restrictions on lending based on student loan debt or non-fraud felony convictions — issues that disproportionately impact Black and Brown communities, were locking people out of the PPP. More changes may need to be made but these reforms are important and will go a long way to keeping the doors open for many small businesses in communities of color.”

The Biden administration in a written statement finds small businesses account for 44 percent of U.S. GDP, create two-thirds of net new jobs, and employ nearly half of America’s workers. Now, millions of main street small businesses — especially Black- and Brown-owned small businesses – are struggling to make ends meet in the wake of the COVID-19 pandemic and resulting economic crisis.

Bryant says the states are crucial but more needs to be done.

For more on the revised Biden-Harris plan to support small businesses in need of PPP, visit there fact sheet on WhiteHouse.gov.

The post After Black and minority businesses missed out on PPP, Biden-Harris seek to remedy appeared first on TheGrio.

Source: After Black and minority businesses missed out on PPP, Biden-Harris seek to remedy