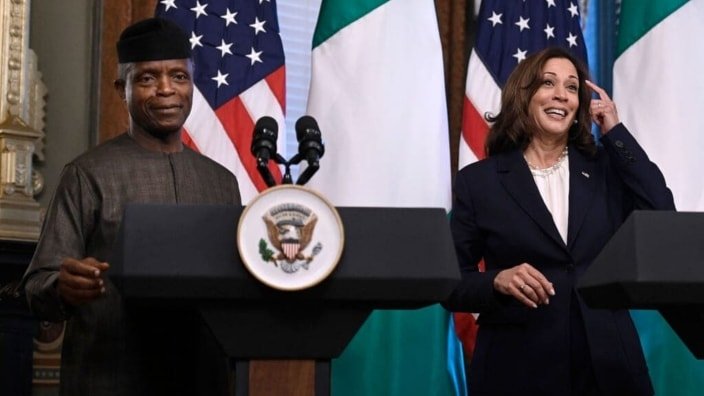 Since releasing its strategy toward sub-saharan Africa in August, the United States has signaled a commitment to re-establishing its relationships with African nations as other world powers attempt to build their influence and footprint on the continent.

The strategy, released by the White House National Security Council, outlines America’s “new vision” of priorities in Africa, which include aiding the region’s COVID-19 recovery, advancing democracy and tackling the climate crisis.

On Friday, theGrio was in the room as Vice President Kamala Harris welcomed Nigerian Vice President Yemi Osinbajo to discuss a range of topics, among them Nigeria’s upcoming elections and regional security issues in West Africa. And last week, the White House announced that President Joe Biden would host South African President Cyril Ramaphosa on Sept. 16 to discuss various issues such as trade and investment, infrastructure, climate and energy, and health.

Biden and Harris’ bilateral meetings with African leaders come after Secretary of State Antony Blinken traveled to South Africa, Rwanda and the Democratic Republic of the Congo in August. Weeks earlier, the White House announced that Biden would host African leaders for a summit in December.

While the continent continues to endure its challenges of instability, drought, famine and hunger — particularly in the face of Russia’s war in Ukraine — African nations have been the subject of great interest to world leaders, either for reasons of diplomacy or international investment and influence. As China and Russia continue to make their footprints across the continent, the United States is seeking to regain its foothold in Africa.

Democratic New York Rep. Gregory Meeks, who serves as chairman of the House Foreign Affairs Committee, told theGrio he is “happy” to see the United States’ renewed engagement with Africa under the Biden-Harris administration.

“The continent of Africa is the fastest growing in the world, in terms of population,” Meeks explained. “According to the United Nations, three out of every four people added to the human population in this century will be African. So, what happens in Africa will be central to the history of the 21st century.”

The congressman said as chair of the foreign affairs committee, he has advocated President Biden and White House officials and also held hearings to engage policy and legislation that brings Africa to the forefront of the U.S.’s foreign policy agenda.

The Biden-Harris administration’s increased engagement with Africa is particularly significant given the last administration’s lack of interest and seemingly outright hostile attitude toward the continent.

“The damage that the previous administration did to our relations with African governments is very real and very tangible,” said Meeks.

While the frayed relationship between the U.S. and Africa due to Trump is not explicitly mentioned in the Biden-Harris administration’s new strategy addressing the continent, it does emphasize a need to regain the its “trust.”

“I think the Biden administration is trying to address it, and diligently and honestly, but a lot of damage was done from the previous administration,” Davis noted.

Congressman Meeks assures, however, that through engagement his office has had with leaders in the region, African nations “still hold the United States in high regard.” He said that “while the previous administration got Africa wrong,” the U.S. has an opportunity to take advantage of Biden’s summit later this year.

Joseph Tolton, who serves as president of Interconnected Justice, a network of Pan-African activists, told theGrio he commends the Biden-Harris administration for its strategy released earlier this summer. However, because of the damage caused by Trump, he believes the White House should have gone further.

“I think that has created a particular perception, and that before the administration rolled out a new strategy and tactic, they have not cleaned up and made it very clear that they totally reject that,” said Tolton.

Tolton recently convened a group of African activists for a conference with his organization’s chapters across the continent in Rwanda, Uganda, Kenya and the Congo. He said advocates appreciated the “positive step” of the Biden-Harris administration “lifting up this idea of the agency of Africans and how we’re really in full partnership with Africans.”

However, there are still concerns shared among Africans about whether or not the United States can commit to supporting democracy in the region when the U.S. itself struggles with its nearly 250-year-old democracy following the Jan. 6 Capitol attack over false claims of a stolen 2020 presidential election made by Trump and his supporters.

Davis pointed out that Trump, the Republican Party’s leading candidate for the 2024 presidential election, “oozes corruption.”

“How do we go to other countries in Africa and try to address their corruption issues? I mean, where’s the credibility?” Davis asked rhetorically. “I think that’s something fundamentally that the strategy says in words, but everyone’s looking at actions … what is the U.S. doing?”

Tolton echoed those concerns among Africans and advocates. “The U.S. for years has given a lot of lip service to the need for there to be a lot of rhetorical pronouncements around our support of democracy. We’ve been doing that for many years, and Biden has done quite a bit of it,” he said. “Are we actually going to have a U.S. foreign policy that is faithful to our rhetorical commitment to support democracies in Africa?”

Tolton called out what he said were “hypocritical policies” by the U.S., including “making military deals with countries where we strengthen the hands of autocrats.” He said Uganda, which has been led by controversial President Yoweri Museveni for more than 30 years, is one glaring example. Museveni has been accused of having his political opponent, Bobi Wine, harassed and arrested ahead of Uganda’s 2021 presidential election.

“It was the bullet in the tear gas that won the election on Museveni’s behalf again,” said Tolton.

Another challenge for the United States’ interests on the African continent is the growing influence of autocratic countries — namely China and Russia. Russia’s deadly war in Ukraine exposed fissures between the U.S. and its allies as well as African nations, as many countries on the continent that are members of the United Nations, abstained from voting in favor of a resolution to condemn Russia. Experts argue that Russia’s influence in Africa is partly due to its arms sales in the region and Africa’s reliance on Russia for food imports.

Similarly, Tolton pointed to a 2022 survey that found most young Africans believed that China had a more positive influence on Africa. “China is presenting the idea of a successful autocracy and, therefore, giving African autocrats a model that they can replicate, which I think is really unfortunate,” said Tolton. He also said China’s investments in Africa are “exploitative.”

“They come in, and they extract the minerals … and they’re raping the land,” said Tolton. Rather than hiring Africans for infrastructure jobs, he said, “they’re bringing in their own labor force to ‘build’ Africa.”

Rep. Meeks, Tolton and Davis all agree that U.S. investments in Africa must also incorporate business development between African Americans and Africans on the continent.

“Africa created the U.S. through slavery … through giving up its most precious resource — its human resource,” explained Davis, who noted that the U.S. strategy toward Africa does not acknowledge that narrative. “Africa actually started the new world order so to speak, not Europe and the U.S.”

Davis said African-American-owned businesses should be included in the U.S.’s partnership strategies with Africa.

“It’s the corporations that get the advantages, and they themselves are not particularly diversified. And they don’t reach out to minority subcontractors,” she said. “All of that can be activated and complement each other. And that would help here with employment in the African-American community [and] in the diaspora community.”

Tolton said leaning in on the African diaspora in the United States would demonstrate “the soft power of our cultural influence and the hard power of equitable economic relationships with the continent [that] can really make a difference in pushing back on China’s influence.”

Davis pointed out another missed opportunity by the U.S. in its policy toward Africa in not calling for the African Union to have a permanent seat on the United Nations Security Council, something Japanese Prime Minister Fumio Kishida also called for during a recent Japan-Africa summit. Currently, only five of the 15 seats in the international body are permanent, and none belong to an African nation. Instead, there are three rotating seats allocated for African states that change every two years.

Rep. Meeks said giving Africa a permanent seat on the Security Council would be in line with the U.S.’s commitment to ensuring that Africa is an equal decision-maker leading its own vision for the region and not simply being led by world powers like the U.S., Russia and China.

“I think that’s tremendously important to happen, as opposed to calling in and trying to tell the African leaders and others what to do or how to do it,” said Meeks. Ultimately, he contended, it’s crucial that the U.S. begins to listen to African leaders.

“We can make sure that, for example, by listening to them when we have the [United States Agency for International Development] program, for example, going out to different countries, whether it’s agricultural areas or urban areas, to make sure that we know what’s there and that we are then helping them accomplish the goals that they are looking to achieve, as opposed to doing something that does not respect their culture [and] history,” Meeks continued.

Centering Africa in U.S. foreign policy, Meeks said, is “the way to go and the way to have a better, more peaceful, more interconnected world.”

“That way,” he added, “I think that we will have better sustainability and a better tomorrow.”

Gerren Keith Gaynor is the Managing Editor of Politics and Washington Correspondent at theGrio. He is based in Washington, D.C.