Ahmaud Arbery’s mother announces plan to give $18,000 in scholarships

Wanda Cooper-Jones will award $3,000 scholarships to six Brunswick High School students in honor of her son, a 2012 graduate.

Wanda Cooper-Jones has announced a plan to award six $3,000 scholarships to students at Brunswick High School this year in honor of her son.

The recipients will be announced on Sunday, May 8, which would have been the day Ahmaud Arbery turned 28 had he not been slain two years ago. 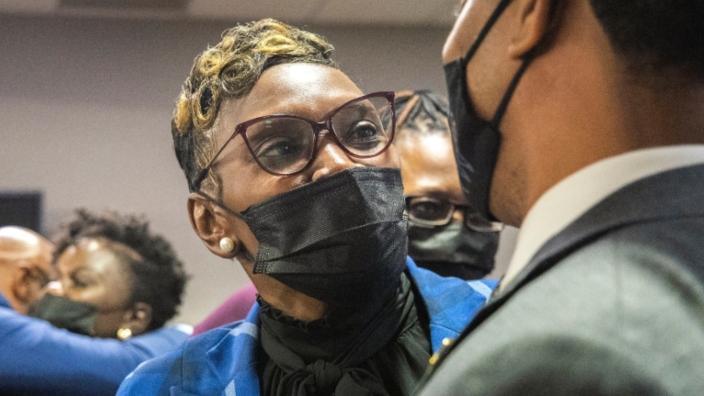 In 2012, Arbery graduated from Brunswick High, where he played on the football team.

He was murdered on Feb. 23, 2020, by 36-year-old Travis McMichael, his retired police officer father Gregory McMichael, 66, and their neighbor William “Roddie” Bryan, 52, and all three men have been sentenced to life in prison — with no parole for the McMichaels. The father and son were convicted of committing a federal hate crime against Arbery this week, as his murder was deemed racially motivated.

“We believe in helping to create opportunities for young Black men to further their education, to start a business, to simply build a life. Something Ahmaud did not have the chance to do,” Cooper-Jones said, according to The Atlanta Journal-Constitution. “Justice goes beyond judgment made in the courtroom. Justice ensures every child, no matter what their skin color, his socioeconomic situation, is safe and has equal opportunities to realize their dreams.”

Cooper-Jones says The Ahmaud Arbery Foundation aims to effect change. “Laws changing is just the beginning,” she said. “Next we must change the minds and the perception of Black men in this country.”

On Wednesday, the second anniversary of Arbery’s murder, Cooper-Jones was presented with a House resolution proclaiming Feb. 23 as Ahmaud Arbery Day in the state of Georgia.

“Today is a great day here in the state of Georgia,” Rep. Sandra G. Scott said yesterday. “And it’s a great day all over the world because the people will be out thanking God for this day, which is known for the rest of our lives … as Ahmaud Arbery Day.”

Other events in Brunswick on Wednesday included a lunch with the local clergy, a 2.23-mile run/walk at the high school, and a dove release in Satilla Shores, the subdivision where Arbery was shot and killed.

The post Ahmaud Arbery’s mother announces plan to give $18,000 in scholarships  appeared first on TheGrio.

Source: Ahmaud Arbery’s mother announces plan to give $18,000 in scholarships