FEMA has shipped fuel, water, blankets and ready-to-eat meals to the affected areas

Add Mother Nature to the pile of crises on President Joe Biden’s plate.

A month into the job and focused on the coronavirus, Biden is seeing his disaster management skills tested after winter storms plunged Texas, Oklahoma and neighboring states into an unusual deep freeze that left millions shivering in homes that lost heat and power, and in many homes, water.

At least 69 deaths across the U.S. have been blamed on the blast of unseasonable weather.

The White House announced on Saturday that the president had declared a major disaster in Texas, and he has asked federal agencies to identify additional resources to address the suffering.

Biden came into office Jan. 20 promising to tackle a series of brewing crises, starting with the coronavirus pandemic and its ripple effects on the economy. He tacked on systemic racism and climate change as top priorities. And now he’s contending with storms that have not only imperiled Americans but also delayed the shipment and administration of millions of doses of coronavirus vaccines.

Biden said Friday that he hopes to travel to Texas next week but doesn’t want his presence and the accompanying presidential entourage to distract from the recovery.

“They’re working like the devil to take care of their folks,” Biden said of Texas officials. He said he’d make a decision early next week about travel.

Biden, who offered himself during the campaign as the experienced and empathetic candidate the nation needed at this moment in time, is working on several fronts to address the situation — and to avoid repeating the mistakes of predecessors who got tripped up by inadequate or insensitive responses in times of disaster.

Part of the job of being president is responding to the destruction left behind by earthquakes, hurricanes, tornadoes and other natural disasters, or events like deadly mass shootings, or even acts of terrorism.

Some have handled such situations better than others.

George W. Bush earned praise for his leadership after the Sept. 11, 2001, terrorist attacks but stumbled during his administration’s halting response to the humanitarian disaster that unfolded in New Orleans after Hurricane Katrina struck the Gulf Coast four years later.

Barack Obama said he should have anticipated the blowback he got for going to the golf course right after he condemned the beheading of a kidnapped American journalist by Islamist militants in 2014. Obama was vacationing on Martha’s Vineyard at the time.

Donald Trump was criticized for tossing rolls of paper towels into a crowd of people in Puerto Rico who had endured Hurricane Maria’s pummeling of the island in 2017. He defended tossing the towels, saying the people were “having fun.”

Bill Clinton, who famously claimed during the 1992 presidential campaign that “I feel your pain,” was a natural at connecting with disaster victims.

Just this week, Republican Sen. Ted Cruz of Texas showed how quickly one bad move during a crisis can become a public relations disaster for a politician.

Cruz came under attack for traveling to Mexico while his constituents suffered without power, heat and running water. His explanation — that his daughters pushed for the getaway because they were out of school — was particularly panned. Cruz later said the trip was a mistake.

Biden has tweeted about Texas and the other affected states, while the White House has issued numerous statements aimed at demonstrating that the federal government is in command of the situation. The president is getting regular updates from his staff and already declared states of emergency in Texas, Oklahoma and Louisiana — adding the disaster designation announced Saturday for Texas. 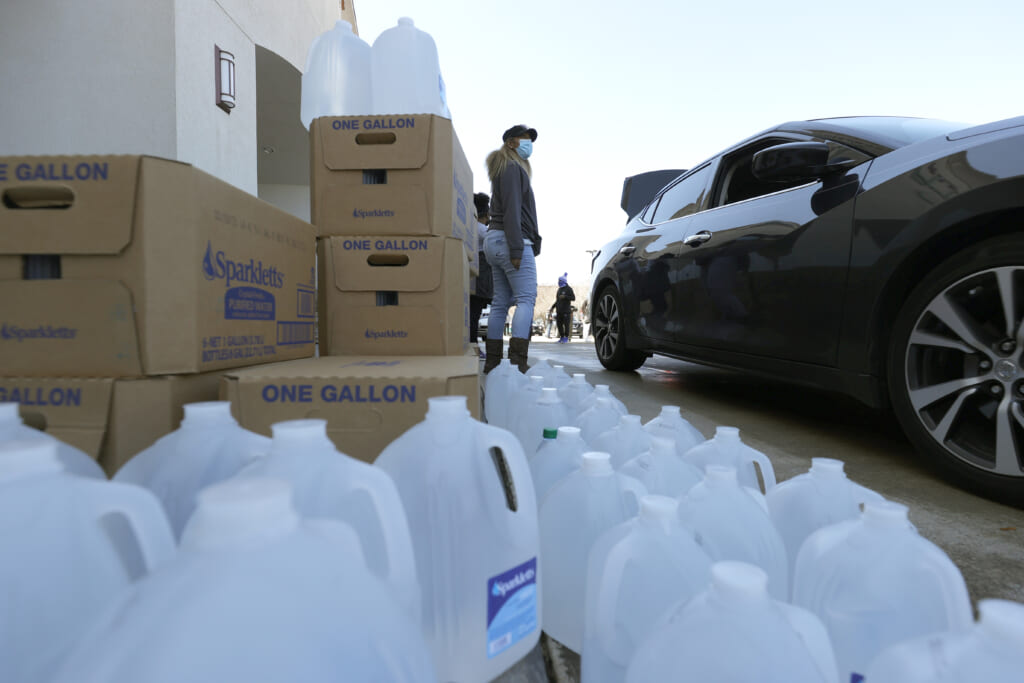 Volunteers prepare to had out water during a water distribution event at the Fountain Life Center on February 20, 2021 in Houston, Texas. Much of Texas is still struggling with historic cold weather, power outages and a shortage of potable water after winter storm Uri swept across 26 states with a mix of freezing temperatures and precipitation. Many Houston residents do not have drinkable water at their homes and are relying on city water giveaways. (Photo by Justin Sullivan/Getty Images)

The Federal Emergency Management Agency has shipped dozens of generators and supplies, including fuel, water, blankets and ready-to-eat meals, to the affected areas.

Biden has spoken to the governors of the seven states most affected by the winter weather. He tweeted a photo of himself on the phone with Republican Gov. Greg Abbott of Texas.

Oklahoma’s Republican Gov. Kevin Stitt, a staunch supporter of Trump’s, was quick to praise Biden for swift action on a disaster declaration.

After speaking with Biden by telephone earlier this week, Stitt specifically thanked the president for “taking the time to reach out this afternoon and offer the federal government’s help for Oklahomans. We had a very productive call and I look forward to working together to find solutions as we recover from this historic storm.”

Barbara Perry, director of presidential studies at the University of Virginia’s Miller Center, said Biden is “well-suited” to deal with the disaster because of his decades of service in the U.S. Senate and as a former vice president and because of “his genuine concern for people.”

“He’s got to show empathy right off the bat,” Perry said in an interview. “It’s important for a president to go to a place that’s been battered, but be careful about the footprint. He doesn’t want to make things worse.”

Read More: Beyonce teams up with Adidas to provide relief for Texans amid storm

Biden, should he decide to visit Texas next week, could also use the trip to press his point that climate change is real and must not go unaddressed, and that the state could do things like winterize its power plants to be better prepared for future storms, Perry said.

But he should take care to not do so in a scolding kind of way.

“We know he cares about climate change, and this is a way to convince people,” Perry said.