“Feeling better now. Nothing is going to make it all better, but at least now there is some justice,” President Biden said.

Attorney Ben Crump shared video footage to Twitter of President Joe Biden in conversation with the family of George Floyd after former police officer Derek Chauvin was found guilty on all three charges in Floyd’s murder.

The president said he was “feeling better now,” after a family member asked how he was doing. “Nothing is going to make it all better, but at least now there is some justice.” 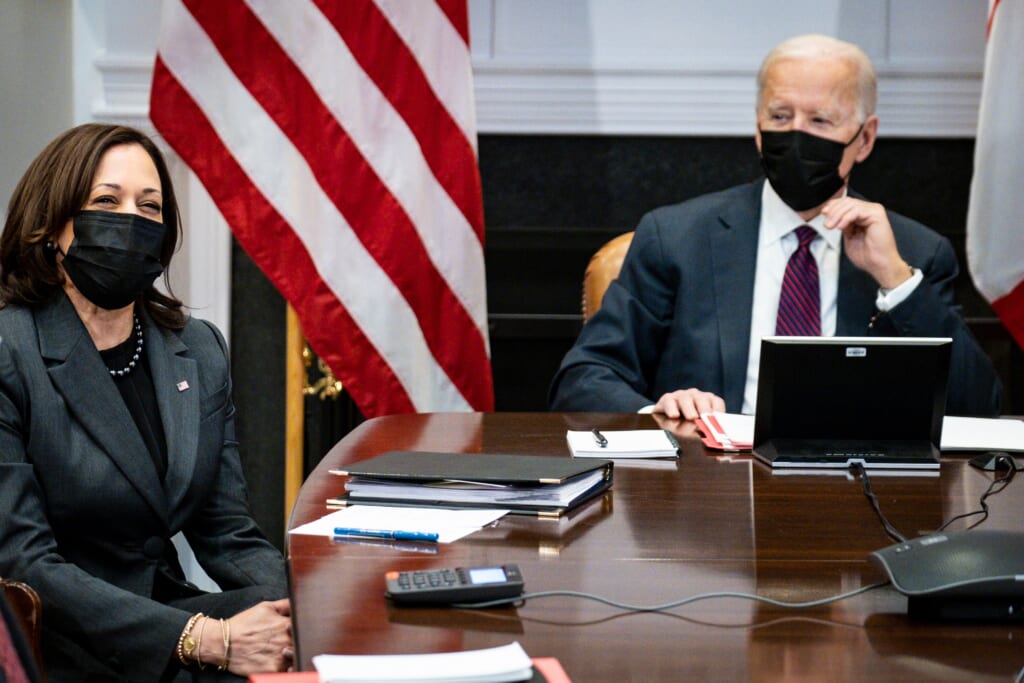 U.S. Vice President Kamala Harris (L), and President Joe Biden participate in a virtual bilateral meeting with Prime Minister Justin Trudeau of Canada in the Roosevelt Room of the White House on February 23, 2021 in Washington, DC. This is Biden and Trudeau’s first bilateral meeting. (Photo by Pete Marovich-Pool/Getty Images)

Vice President Kamala Harris can also be heard on the phone call, being passed the phone from President Biden.

“I’m just so thankful for your entire family … your courage, your commitment, your strength,” she remarked. “This is a day of justice in America.”“In George’s name and memory, we are going to make sure his legacy is intact and that history will look back at this moment and know that is an inflection moment,” said Harris. “We really do believe that with your leadership and the president that we have in the White House, that we’re going to make something good come out of this tragedy.”

President Biden also offered to fly the Floyd family to Washington on Air Force One in the event he signs the George Floyd Justice In Policing Act, which was passed by the U.S. House of Representatives last summer and currently sits in the U.S. Senate. “I guarantee it,” he said.

President Biden and VP Harris call the Floyd family after the GUILTY verdict! Thank you @POTUS & @VP for your support! We hope that we can count on you for the police reform we NEED in America! ✊? pic.twitter.com/cg4V2D5tlI

Read More: Derek Chauvin murder trial could be the verdict of a generation

As theGrio reported on Monday, President Biden called the Floyd family in anticipation of the verdict, as George Floyd’s youngest brother Philonise Floyd shared during a Tuesday appearance on NBC’s TODAY Show.

“He was just calling,” Philonise Floyd shared. “He knows how it is to lose a family member, and he knows the process of what we’re going through. So he was just letting us know that he was praying for us, hoping that everything will come out to be OK.”

He continued by calling the trial a “pivotal point.”

People react after the verdict was read in the Derek Chauvin trial on April 20, 2021 In Minneapolis, Minnesota. (Photo by Scott Olson/Getty Images)

Chauvin faces up to 12 and a half years on either second-degree unintentional murder or third-degree murder according to sentencing guidelines. Second-degree manslaughter has a maximum four-year sentence. Aggravating factors could determine a longer sentence of up to 40 years. Judge Peter Cahill presided over Chauvin’s trial that began on March 29 with opening statements from the state and defense. The prosecution called 38 witnesses and experts which took 11 days to demonstrate that Chauvin’s actions led to Floyd’s death.

Floyd died on May 25, 2020 in Minneapolis after Chauvin placed his knee on the 46-year-old’s neck for almost nine minutes as a crowd watched. The bystanders urged Chauvin to release his hold but he did not yield. Floyd could be heard on now viral footage pleading for help and insisting that he couldn’t breathe as his face was shoved against the pavement.

The jurors were ultimately swayed by the evidence presented by the prosecution. The jury was compromised of six white women, three Black men, two mixed women, three white men and one Black woman.