Thomas-Greenfield spoke about America’s racist history at a recent appearance at the Rev. Al Sharpton‘s National Action Network’s 2021 virtual convention. According to New York Post, the ambassador’s comments were originally taped and played this week. 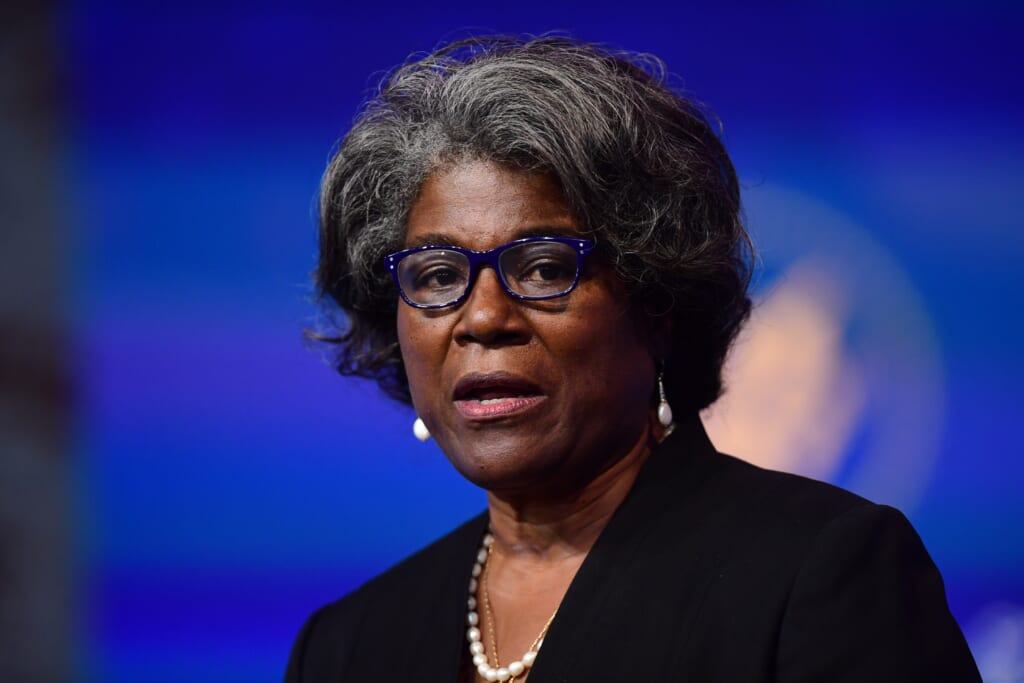 “We have to acknowledge that we are an imperfect union and have been since the beginning,” she said. “I’ve seen for myself how the original sin of slavery weaved white supremacy into our founding documents and principles.”

She touched upon her own background.

“I have personally experienced one of America’s greatest imperfections. Those of us who experience racism cannot, and should not, internalize it, despite the impact it can have on our everyday lives. Racism is the problem of the racist. And it is the problem of the society that produces the racist. And in today’s world, that is every society,” she added.

Her words prompted a reporter during a White House briefing to ask if she will be removed from her position. Newsmax’s Emerald Robinson asked if President Joe Biden is “going to remove her from her position,” because of her comments. She compared the comments to anti-U.S. rhetoric made by Chinese diplomats last month in Alaska.

Linda Thomas-Greenfield appears before the Senate Foreign Relations Committee hearing on her nomination to be the United States Ambassador to the United Nations, on Capitol Hill on January 27, 2021 in Washington, DC. (Photo by Michael Reynolds-Pool/Getty Images)

But the White House Press Secretary Jen Psaki confirmed on Friday he will not and that Thomas-Greenfield is more than qualified.

“Is the president going to remove an African American woman with decades of experience in the Foreign Service who is widely respected around the world from her position as ambassador to the UN? He is not,” said Psaki.

“He is proud to have her in that position. She is not only qualified, he believes she is exactly the right person in that role at this moment in time,” she added. “I have not seen her comments. I will say that there’s no question that there has been a history of institutional racism in this country and that doesn’t require the UN ambassador to confirm that.”

Social media users took to Twitter to applaud Psaki for her swift and remarkable response; agreeing that America obviously has a troubling and dark racist past we still grapple with today.

“Our country was built with slave labor slaves could not vote slaves weren’t considered to be a full human it took until the 1950s to even start to make some progress on Civil Rights yes, our country and founding of our country was based on white supremacy Psaki is so good,” said one user.

our country was built with slave laborslaves could not voteslaves weren't considered to be a full humanit took until the 1950s to even start to make some progress on Civil Rightsyes, our country and founding of our country was based on white supremacyPsaki is so good

“Slavery is in the Constitution. Black people are counted as 3/5 of a white person. Yes, racism is quite literally “woven into our founding documents,” added another.

Slavery is in the Constitution. Black people are counted as 3/5 of a white person. Yes, racism is quite literally “woven into our founding documents.”