This year’s commemoration comes as some states seek to roll back ballot access, while advocates desire to restore a key part of the Voting Rights Act

Bloody Sunday became a turning point in the fight for voting rights. Footage of the beatings helped galvanize support for passage of the Voting Rights Act of 1965. 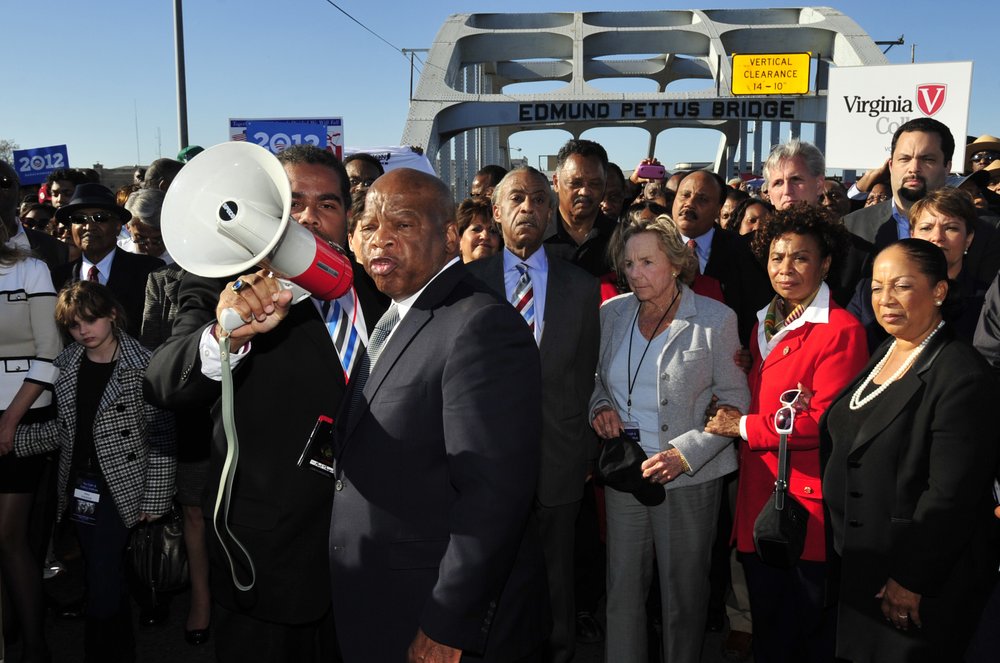 In this March 4, 2012, file photo, U.S. Rep. John Lewis, D-Ga., center, talks with those gathered on the historic Edmund Pettus Bridge during the 19th annual reenactment of the “Bloody Sunday” Selma to Montgomery civil rights march across the bridge in Selma, Ala. (AP Photo/Kevin Glackmeyer, File)

This year’s commemoration comes as some states seek to roll back expanded early and mail-in voting access and efforts have been unsuccessful to restore a key section of the Voting Rights Act that required states with a history of discrimination to get federal approval for any changes to voting procedures.

“Those of us who are still living, particularly the young, need to take up the challenge and go forward because there is still so much to be done,” said former state Sen. Hank Sanders, one of the founders of the annual celebration.

The event typically brings thousands of people to Selma. However, most of the events are being held virtually this year because of the COVID-19 pandemic.

The annual Martin & Coretta King Unity Breakfast was held as a drive-in event. The outdoor event included some in-person speakers such as Rev. Bernard LaFayette, and the founders of the group Black Voters Matter. Cliff Albright, one of the group’s founders, spoke about the continued need to fight for voter access. 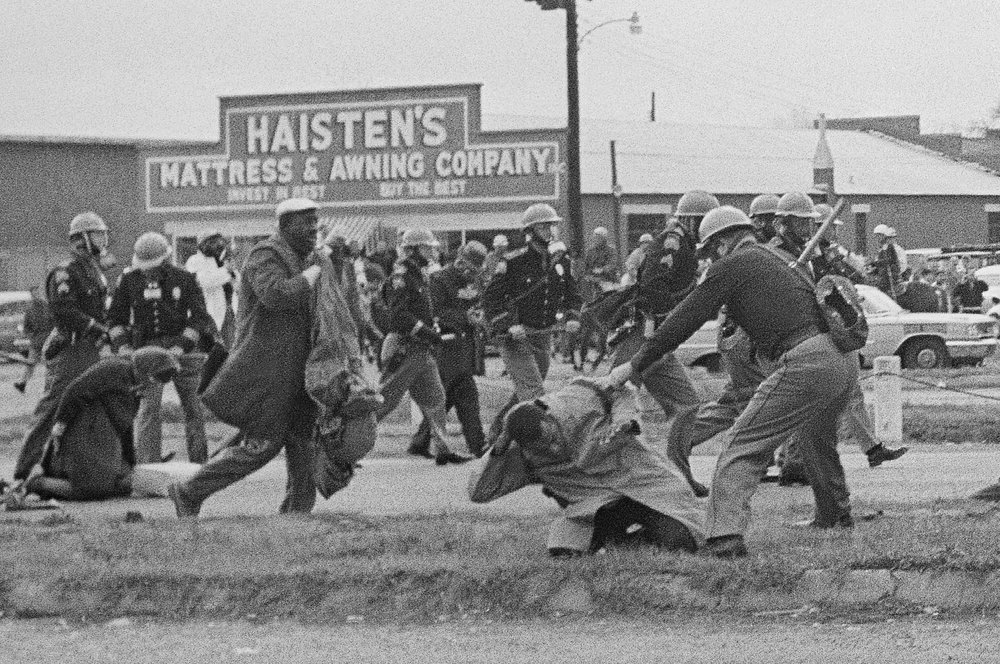 In this March 7, 1965, file photo, a state trooper swings a billy club at John Lewis, right foreground, chairman of the Student Nonviolent Coordinating Committee, to break up a civil rights voting march in Selma, Ala. (AP Photo/File)

“Every eligible voter should be able to vote and have that vote counted,” Biden said in the message. “If you have the best ideas, you have nothing to hide. Let the people vote.”

The two newly elected U.S. senators from Georgia — Raphael Warnock and Jon Ossoff — also spoke by video. Warnock remembered Lewis, whom he called both a mentor and an inspiration, and spoke about the current conflict over voting access.

“Sadly there are forces at work in our country right now especially in my home state of Georgia who are trying to push back against voting rights,” he said.

Lowery, a charismatic and fiery preacher, is often considered the dean of the civil rights veterans and led the Southern Christian Leadership Conference. 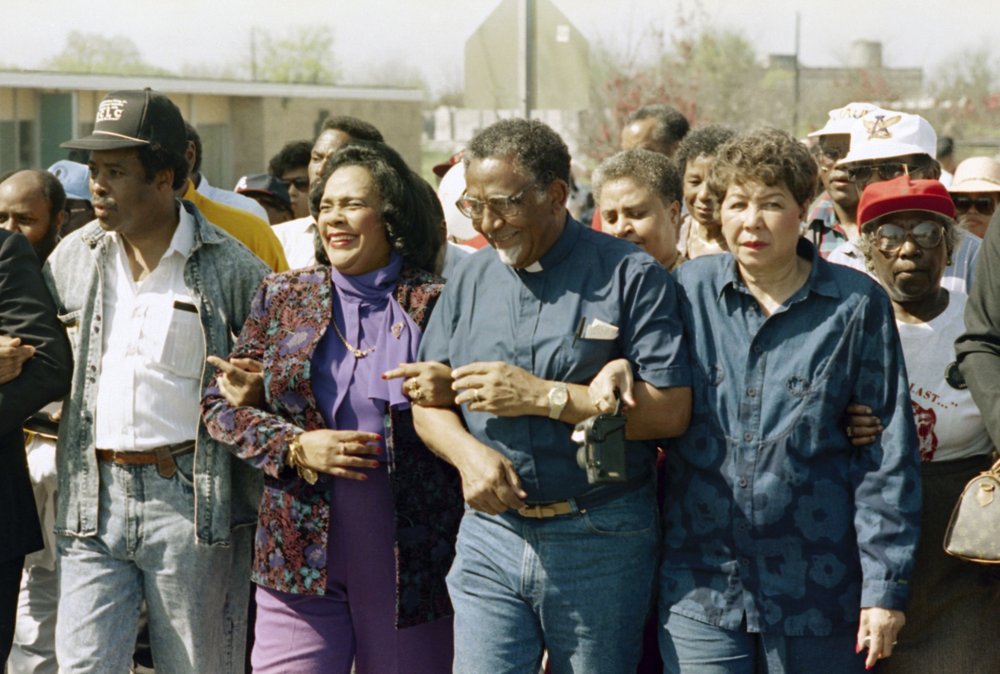 Vivian began organizing sit-ins against segregation in the 1940s and later joined forces with the Rev. Martin Luther King Jr. In 1965, Vivian led dozens of marchers to a courthouse in Selma, confronting the local sheriff on the courthouse steps and telling him the marchers should be allowed to register to vote. The sheriff responded by punching Vivian in the head.

Boynton was arrested for entering the white part of a racially segregated bus station in Virginia, launching a chain reaction that ultimately helped to bring about the abolition of Jim Crow laws in the South. Boynton contested his conviction, and his appeal resulted in a U.S. Supreme Court decision that prohibited bus station segregation.

His case inspired the Freedom Riders of 1961 — a group of young activists who went on bus rides throughout the South to test whether court-ruled desegregation was actually being enforced. They faced violence from white mobs and arrest by local authorities. 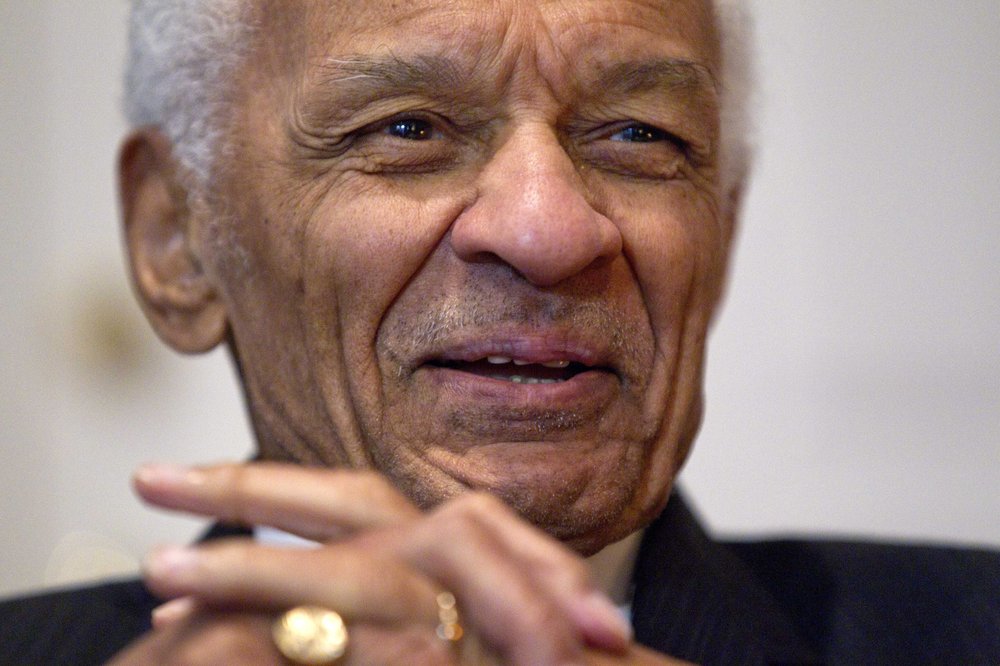 In this Jan. 4, 2012, file photo, civil rights activist C.T. Vivian sits at his home in Atlanta. This Sunday, March 7, 2021, marks the 56th anniversary of the Selma marches and “Bloody Sunday,” when more than 500 demonstrators gathered on March 7, 1965, to demand the right to vote and cross Selma’s Edmund Pettus Bridge. (AP Photo/David Goldman, File)

Organizers acknowledged the fallen civil rights leaders and planned to lay wreaths at the bridge in their honor.

The march across the Selma bridge was sparked by events in nearby Marion, where a Black man had been killed by a white Alabama state trooper during peaceful protests for voting rights. Jimmie Lee Jackson, a 26-year-old church deacon, was shot while trying to protect his mother from being hurt and died eight days later. In response, activists in Marion and Selma gathered for a march on March 7, their goal the state capital in Montgomery.

Although the Jackson case occurred in 1965, it has particular resonance in 2021 as the state of Minnesota prepares to try former Minneapolis police officer Derek Chauvin in the death of George Floyd, an African American. Floyd died after Chauvin, who is white, pressed his knee onto Floyd’s neck while Floyd was held face-down on the ground in handcuffs, saying he couldn’t breathe. Body camera footage indicates Chauvin’s knee was on Floyd’s neck for about nine minutes. Floyd was later pronounced dead at a hospital.