Clarence Thomas: Federal marijuana laws may no longer ‘be necessary or proper’

Supreme Court Justice Clarence Thomas believes federal laws against the sale and cultivation of marijuana are archaic and nonsensical.

“A prohibition on interstate use or cultivation of marijuana may no longer be necessary or proper to support the federal government’s piecemeal approach,” Thomas wrote in a statement on Monday.

Thomas, one of the Supreme Court’s most conservative justices, delivered his remarks after the court declined to hear the appeal related to federal tax breaks claimed by a medical marijuana dispensary in Colorado, per CNBC. The law does not allow marijuana businesses to deduct business expenses.

“Under this rule, a business that is still in the red after it pays its workers and keeps the lights on might nonetheless owe substantial federal income tax,” Thomas said.

Medical marijuana is legal in 36 states and 18 allow recreational use. In 2005, the Supreme Court upheld federal laws making marijuana possession illegal but Thomas said these policies may be outdated.

“Federal policies of the past 16 years have greatly undermined its reasoning,” he said. “The federal government’s current approach is a half-in, half-out regime that simultaneously tolerates and forbids local use of marijuana.”

The justice went on to explain how the government has “sent mixed signals on its views” related to marijuana.

Thomas noted that most marijuana businesses fully operate in cash due to federal restrictions that prevent them from obtaining bank services. As such, they are more vulnerable to robberies. Additionally, marijuana businesses do not experience “equal treatment” under the law because a tax code provision prevents them from deducting expenses.

In his statement, Thomas said the “disjuncture between the Government’s recent laissez-faire policies on marijuana and the actual operation of specific laws is not limited to the tax context.”

Thomas argues that federal marijuana laws threaten the principles of federalism, per the report.

“If the Government is now content to allow States to act ‘as laboratories, then it might no longer have authority to intrude on ‘[t]he States’ core police powers . . . to define criminal law and to protect the health, safety, and welfare of their citizens,’” Thomas said. 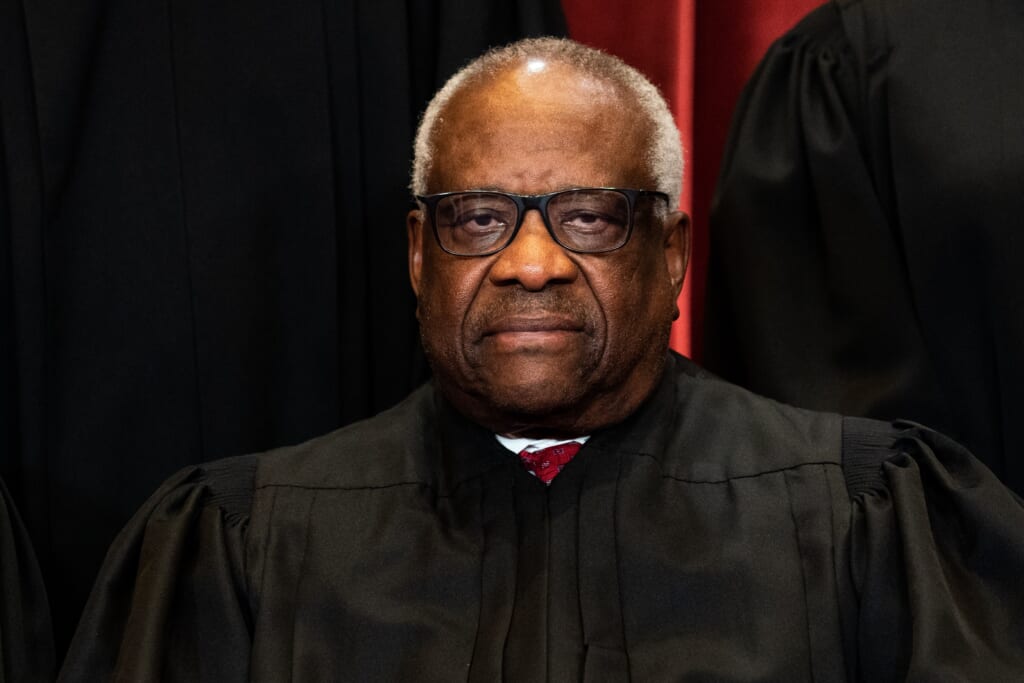 In 2019, then-presidential hopeful Kamala Harris revealed that not only has she smoked marijuana, she also supports the legalization of the drug.

In an interview with the hosts of The Breakfast Club, Harris also rejected claims that she opposes legalizing the drug, theGrio reported.

“That’s not true. And look I joke about it, half joking — half my family’s from Jamaica, are you kidding me,” she said.

“Now, that being said — and this is not a ‘but,’ it is an ‘and’ — and we need to research, which is one of the reasons we need to legalize it. We need to move it on the schedule so that we can research the impact of weed on a developing brain. You know, that part of the brain that develops judgment, actually begins its growth at age 18 through age 24.”

“But I am absolutely in favor of legalizing marijuana. We’ve got to do it,” she said later in the interview. “We have incarcerated so many, and particularly young men and young men of color, in a way that we have not for the same level of use (among) other young men.”

Have you subscribed to theGrio’s podcast “Dear Culture”?

The post Clarence Thomas: Federal marijuana laws may no longer ‘be necessary or proper’ appeared first on TheGrio.

Source: Clarence Thomas: Federal marijuana laws may no longer ‘be necessary or proper’