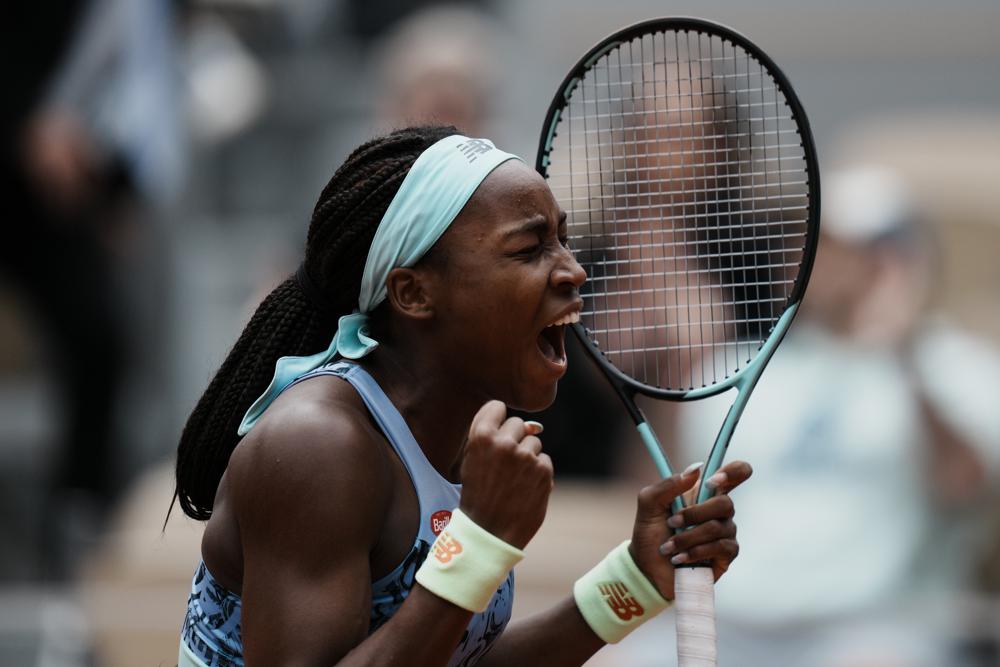 “You’re never going to play your best tennis in a Slam every moment of the match, but I think I’m getting better and better,” said Gauff.

Quite a trip to Paris in the springtime for 18-year-old American Coco Gauff: She celebrated graduating from high school — an achievement saluted via social media by former first lady Michelle Obama — and now is into the French Open quarterfinals for the second consecutive year.

How did YOU spend the past week or so?

Learning as she goes, Gauff took control of a tight opening set against No. 31 seed Elise Mertens of Belgium on Sunday and grabbed the last eight games to pull away for a 6-4, 6-0 victory in the fourth round at Roland Garros.

Coco Gauff of the U.S. celebrates winning against Belgium’s Elise Mertens in two sets, 6-4, 6-0, during their fourth round match at the French Open tennis tournament in Roland Garros stadium in Paris, France, Sunday, May 29, 2022. (AP Photo/Thibault Camus)

“You’re never going to play your best tennis in a Slam every moment of the match, but I think I’m getting better and better,” said Gauff, who is seeded 18th at the clay-court major tournament, “and I think, mentally, I can’t ask for much more from myself in each match.”

Next up will be a match against Sloane Stephens, the 2017 U.S. Open champion and 2018 French Open runner-up, or No. 23 seed Jil Teichmann of Switzerland.

The other quarterfinal on the bottom half of the draw will be a meeting between left-handers: No. 17 Leylah Fernandez, a 19-year-old Canadian who reached the final at last year’s U.S. Open, against 59th-ranked Martina Trevisan of Italy, who also got to the quarterfinals in Paris two years ago.

“Every time I step out on the court, I still have something to prove,” said Fernandez, who was ranked only 73rd last September when she beat four-time major champion Naomi Osaka on the way to being the runner-up to Emma Raducanu at Flushing Meadows. “I still have that mindset I’m the underdog. I’m still young.”

Corey, left with cap, and Candi Gauff, right, parents of Coco Gauff of the U.S., watch her fourth round match against Belgium’s Elise Mertens at the French Open tennis tournament in Roland Garros stadium in Paris, France, Sunday, May 29, 2022. (AP Photo/Thibault Camus)

Gauff, of course, is even younger.

A 2021, she was the youngest French Open quarterfinalist in 15 years, but frittered away five set points in the opener of a loss to eventual champion Barbora Krejcikova.

That stuck with her Sunday, when she was in a back-and-forth first set against Mertens that was 4-all before Gauff got going. Afterward, she praised herself for staying calm in the moment.

Gauff burst onto the scene at Wimbledon in 2019 when she was 15 by becoming the youngest — yes, there’s that word again — qualifier in tournament history, beating Venus Williams in the first round of the main draw and getting all the way to the fourth.

Other Week 2 runs at major tournaments have followed, although she’s prouder of her success with schoolwork. She posted a series of pictures on Instagram of herself wearing her cap and gown and holding a diploma, the Eiffel Tower in the background.

A response from Obama, whom Gauff has met, was a nice surprise.

“I’m super thankful for that message. … What really meant a lot: It wasn’t about the tennis, it was about my education,” Gauff said. “So I think that meant more to me.”