It’s Celtics vs. Warriors in the NBA Finals, but who has the edge? 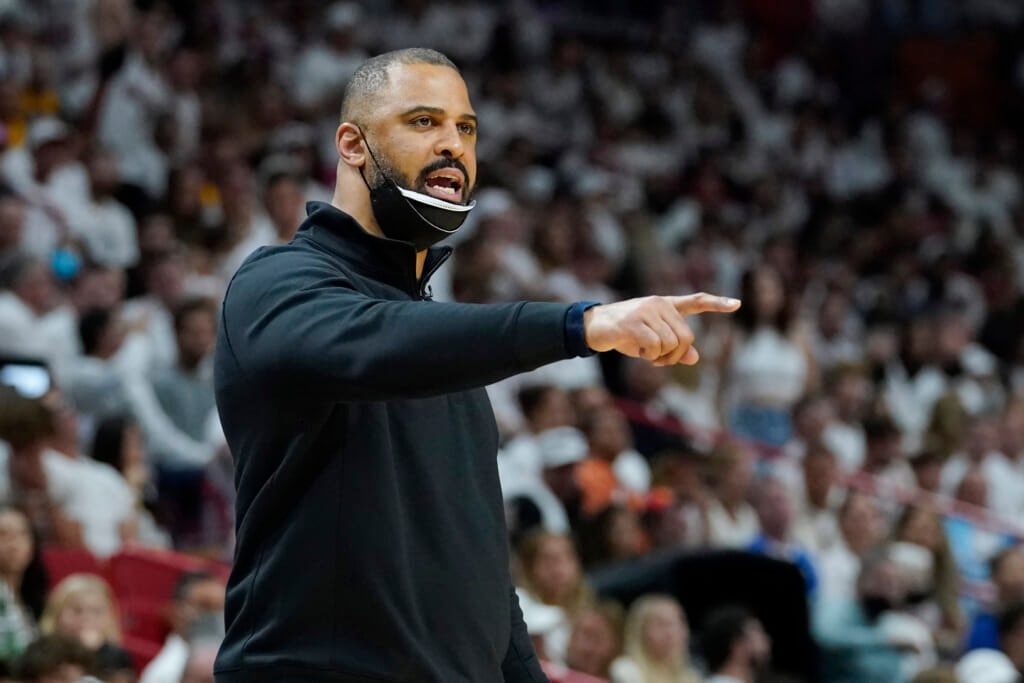 As Celtics coach Ime Udoka takes his team to the Finals in his first year as head coach, he now has to contend with veteran Steve Kerr and his championship-tested squad

Somewhere, Gregg Popovich must be pleased.

Ime Udoka and Steve Kerr played for Popovich with of the San Antonio Spurs, both served as assistant coaches under him, and neither makes any effort to hide the affinity they have for the NBA’s career victory leader

And now, Udoka and Kerr are about to go head-to-head — in the NBA Finals.

Boston Celtics head coach Ime Udoka gestures during the first half of Game 7 of the NBA basketball Eastern Conference finals playoff series against the Miami Heat, Sunday, May 29, 2022, in Miami. (AP Photo/Lynne Sladky)

The Warriors have been waiting for an opponent since this past Thursday after needing only five games to beat Dallas for the West title. The Celtics got there the hard way, winning Game 7 in Miami on Sunday night to capture the East.

“We stayed with it. We believed in each other. We made a commitment on the defensive end,” said Celtics forward Al Horford, who, after 141 playoff games, is headed to the NBA Finals for the first time. “That was the biggest thing, defending.”

It’s also a rematch of the 1964 finals, when Bill Russell and the Celtics topped the Warriors in five games.

“I’ve said it many times: You go to the finals, it’s almost a two-month journey filled with stress and fatigue and everything else,” said Kerr, who gave his team Friday and Saturday off before bringing them back to work Sunday. “So, if you can get a little bit of a break, it’s very meaningful. Hopefully, we can get healthy and have a few days of really good prep and be ready to go on Thursday.”

Jayson Tatum and the Boston Celtics celebrate their Game 7 victory on May 29, 2022. (Getty Images)

Golden State won at Boston 111-107 on Dec. 17, behind 30 points from Stephen Curry. The Celtics rolled on Golden State’s home floor in the rematch on March 16, winning 110-88 in the game in which Curry injured his foot — and that’s where his regular season ended.

Curry was ready to go for the playoffs. So were the rest of the Warriors. They’re 12-4 in the playoffs, getting through Denver, Memphis and Dallas to get to the title round.

“It all starts with Steph,” Kerr said.

The other name on that list is Kerr — who did it with Golden State in 2015, the start of this run of greatness from the Warriors. That was the beginning of six finals appearances in eight years, the two exceptions being when injuries and a roster reset kept them from the playoffs in 2020 and 2021.

Golden State Warriors coach Steve Kerr yells out instructions during the first half of Game 5 of the team’s NBA basketball playoffs Western Conference finals against the Dallas Mavericks in San Francisco, Thursday, May 26, 2022. (AP Photo/Jeff Chiu)

“You can’t take it for granted,” Curry said after the West title series. “Nothing’s ever guaranteed. We understand how hard it is to win. We’ve said that until we’re blue in the face the last two years. This is definitely special. Proud of everybody that is in that locker room, that came with it all year. Now we have an opportunity to go finish a job.”

Udoka played for Popovich and later was a San Antonio assistant. Kerr played for the Spurs, then assisted Popovich with USA Basketball through last summer’s Tokyo Olympics — when the Americans won a fourth consecutive gold medal.

The Warriors’ Draymond Green was on that Olympic team. So was Boston’s Jayson Tatum. They celebrated winning gold together, and now they’ll try to go through one another to get their fingerprints on the gold trophy that goes to the NBA champions — the Larry O’Brien.

“This is an opportunity that players dream of,” Golden State’s Andrew Wiggins said. “To be put in a position to win it all.”

And if nothing else, a Warriors-Celtics matchup made Green seem prophetic.

After the Warriors won the West, Green visited the TNT broadcast set after the game and was prodded by Shaquille O’Neal to say which team from the then-undecided East title series that he would like to play.

Green began giving a diplomatic answer, saying that both the Heat and Celtics were tough. O’Neal pressed him to be honest, and Green — never shy with words — gave in.

The post It’s Celtics vs. Warriors in the NBA Finals, but who has the edge? appeared first on TheGrio.