“Is there a contradiction there?” Acosta asked DHS Secretary Alejandro Mayorkas about America’s treatment of refugees.

Acosta noted to Mayorkas on Sunday that America has welcomed at least 50,000 Afghans who aided the U.S. war effort in their homeland, but is sending back Haitian refugees.

“We’re welcoming Afghans, but we’re sending Haitians back. Is there a contradiction there?” Acosta asked, as reported by Newsweek.

“Not at all,” replied Mayorkas, the first Latino and first immigrant confirmed to serve as Homeland Security secretary. “Those two processes are quite different. We are bringing in Afghan nationals by air after they have been screened and vetted. That is a safe, orderly and humane process.” 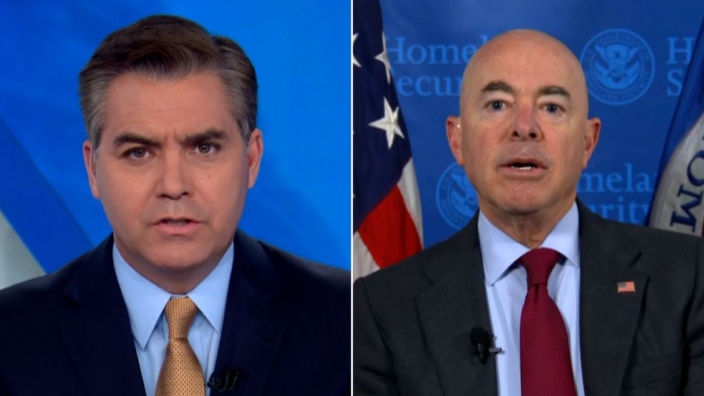 “That is quite different,” he contended, “than irregular migration, illegal entry in between ports of entry in a time of pandemic when we have been quite clear, explicit, for months now that that is not the way to reach the United States. And it will not succeed.”

President Joe Biden‘s administration is ramping up the deportation of Haitians, with increased flights leaving Del Rio, Texas. Associated Press is reporting up to eight flights a day will depart to send migrants back to the Caribbean nation struggling with natural disasters and political turmoil.

Mayorkas confirmed he will be traveling to Del Rio, where thousands of Haitian migrants are camping, to assess the situation.

We have seen a significant influx of Haitian migrants in Del Rio, TX. But we are surging resources, and @DHSgov is taking a multi-prong approach to this. https://t.co/AWD5isegmX

#NEW: DHS Secretary Alejandro Mayorkas will travel to Del Rio today to receive an operational briefing on what steps are being taken to address the current migrant situation.

Massachusetts Congresswoman Ayanna Pressley recently said, according to The Philadelphia Inquirer columnist Will Bunch, “That ICE [the U.S. Immigration and Customs Enforcement] would continue to carry out the mass deportations of our Haitian neighbors — with Haiti in the midst of its worst political, public health and economic crises yet — is cruel and callous.”