Yeezy fans, rejoice! According to a new report, Kanye West previewed some songs from his new album at a Las Vegas listening event on Sunday.

It’s been two years since West’s ninth studio album, Jesus is King. Although it debuted in 2019, West wound up winning Best Contemporary Christian Music Album at the 2021 Grammys due to missing the 2020 cut-off.

Since then, fans have been more interested in West’s personal life than his musical output, given his high-profile divorce proceedings with estranged wife Kim Kardashian West. Now West is ready to let the music speak for itself.

Clips from a private invite-only listening event in Las Vegas began to surface on the internet by Sunday night.

After hearing snippets of at least two songs, fans are speculating that the material is from his upcoming album entitled, Donda, named after his late mother who died in 2007. The private event was held In Vegas from 6:30 – 8:30 p.m., according to an invite that surfaced on Twitter.

Soooo yeah….there’s a private event for a @kanyewest listening party….DONDA is getting closer and closer pic.twitter.com/SOxf12UoS7

The invite simply reads ‘private event’ in its header, and that no large bags and cell phones were permitted. Despite that prohibition, some attendees were able to grab a few videos and recordings of the upcoming music, which fans are eating up on social media.

Photos of West at the listening party also were released online, with SAINT tweeting out a picture of the rapper at the event.

In the clip getting the most buzz, West raps about a broken family and a “father who didn’t show up.”

The lyrics, per Variety read, “daughter just turned one, and she still depending on her mom, big brother in the streets, he went and bought him a gun.”

Fans have responded positively to the leaked snippets, with one user simply writing, “He’s back.” Others are excited about the album but want to go in blind whenever West decides to drop the project.

One user tweeted, “I’m glad I found this so I know not to listen to it, I don’t wanna hear nothing til it drops, I’ll look at info just not listen to anything.” 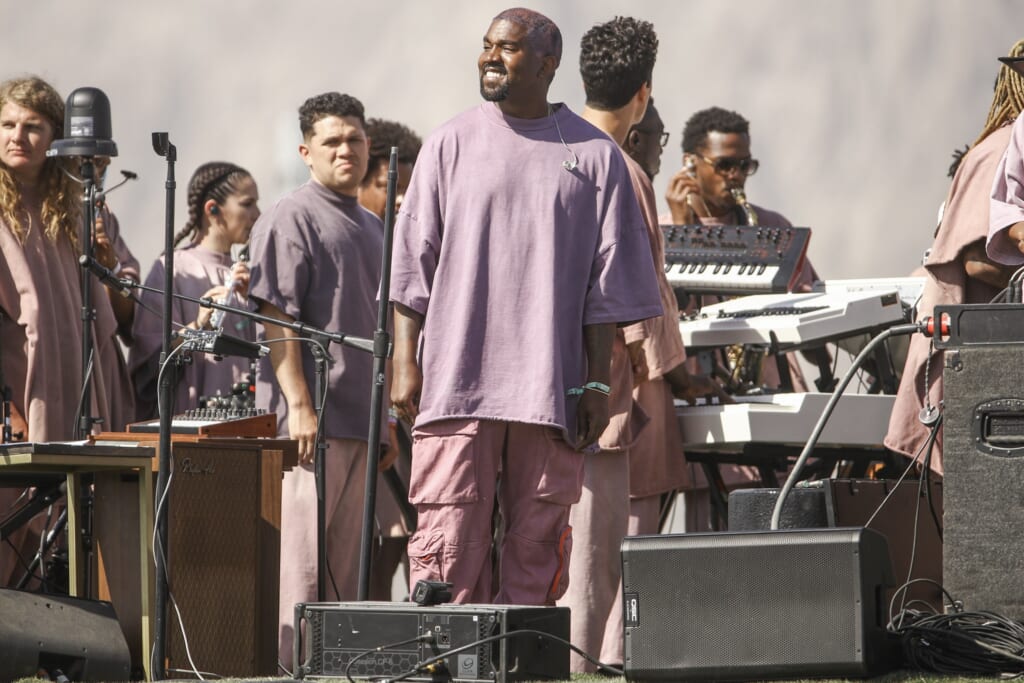 Justin Laboy, host of The Respectfully Justin Show on Revolt TV, tweeted about the event and shared a picture of himself with West.

He wrote, “Kanye played his new album for me & @KDTrey5 last night in Vegas. Man listen! The production is light years ahead of its time, and the bars sound like he’s broke & hungry trying to get signed again. Any artist who plan on dropping soon should just push it back #Respectfully,” before adding in another tweet, “ALBUM OF THE YEAR. DONT @ ME.”

ALBUM OF THE YEAR. DONT @ ME pic.twitter.com/baaL9fHKOv

If recent tweets are any indication, West isn’t planning on stopping these private events anytime soon. One user shared in a tweet that he was invited to a listening party in Atlanta for this week, writing, “Kanye’s team really just reached out and invited me to the listening party in Atlanta on Thursday. Full access. I’m in f— shock. Thank u guys for making this shit possible for me. I’m happy asf.”

Kanye’s team really just reached out and invited me to the listening party in Atlanta on Thursday. Full access. I’m in fucking shock. Thank u guys for making this shit possible for me ❤️ I’m happy asf

Pusha T just shared this image with information about another ‘DONDA’ listening event on Thursday in Atlanta. Do you think we’ll be getting a new album from Kanye West soon? pic.twitter.com/JD9O6fqbo1