Vice President Kamala Harris, the nation’s first Black woman to serve in the role, presided over the historic vote.

Judge Ketanji Brown Jackson has been officially confirmed to the Supreme Court, becoming the first Black woman justice in U.S. history after the Senate voted 53-47 Thursday afternoon in favor of President Joe Biden’s nomination for the high court.

Vice President Kamala Harris, the nation’s first Black woman to serve in the role, presided over the historic vote — making the moment doubly historic. “This nomination is confirmed,” said Vice President Harris before the Senate floor burst into applause.

Judge Jackson watched alongside President Biden at the White House inside the Roosevelt Room as the Senate took up the vote for confirmation. Moments after the confirmation, the two embraced with a hug. Jackson was visibly emotional. 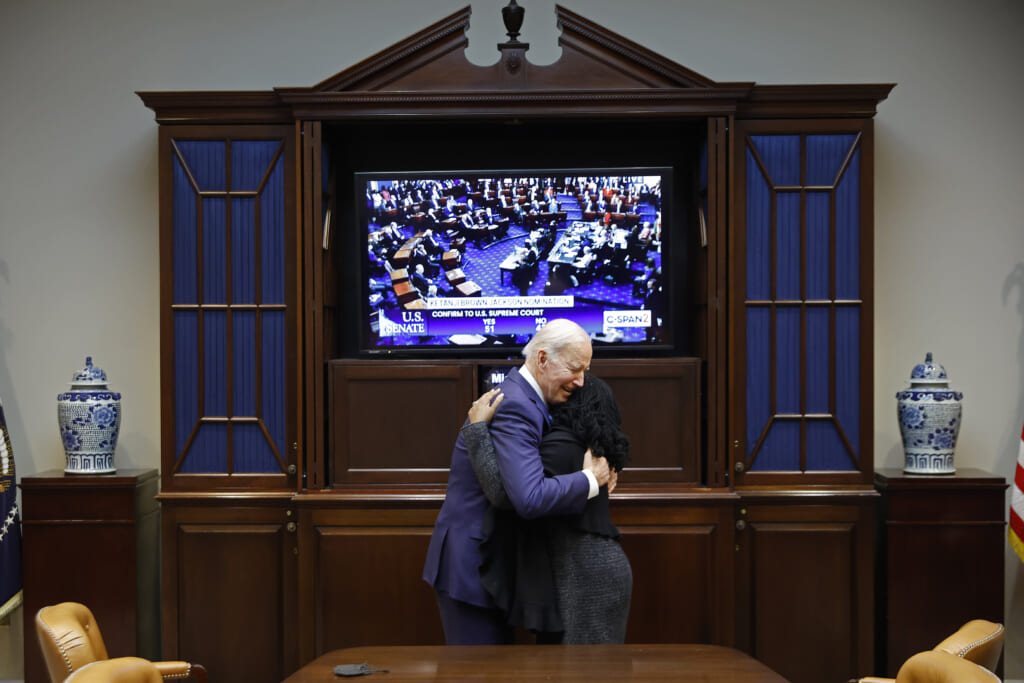 U.S. President Joe Biden embraces Ketanji Brown Jackson moments after the U.S. Senate confirmed her to be the first Black woman to be a justice on the Supreme Court in the Roosevelt Room at the White House on April 07, 2022 in Washington, DC. (Photo by Chip Somodevilla/Getty Images)

Jackson will begin serving her lifetime appointment in October to fill the seat being left vacant by Justice Stephen Breyer, who is retiring at the end of this Supreme Court session.

To mark the historic moment, the White House plans to hold an intimate COVID-19 conscious celebration at noon ET Friday to commemorate Jackson’s ascension to the Supreme Court.

Minyon Moore, who served as an advisor to President Biden throughout the Supreme Court nomination process, said this is a time for the nation and Black women.

“This is an exciting moment for our country. We are poised to take another step towards a more perfect union thanks to President Joe Biden and Vice President Kamala Harris. As we witnessed during Judge Jackson’s hearings, her knowledge of the law and the constitution is undeniable. She handled the process with a great deal of integrity and grace. Millions of people from all walks of life are rallying with her and for her,” said Moore during an interview with theGrio.

Immediately following the vote, the Congressional Black Caucus marked the moment with a press conference in front of the Supreme Court. They wanted to be the firsts on camera in front of the institution that spans 233 years with 115 justices.

In the moments leading up to the vote on the Senate floor, members of the Congressional Black Caucus marched to the Senate chambers to watch the anticipated full confirmation vote for Jackson.

From the very beginning, Democratic Senate Majority Leader Chuck Schumer is said to have created a “robust whipping operation” that involved not only the count of all Democrats in support of the confirmation votes but also the handful of Republicans who voted yes. Three GOP members voted to confirm Jackson: Senators Mitt Romney, Susan Collins and Lisa Murkowski.

The stability of Jackson’s Senate confirmation became a concern in the days and moments leading up to the vote as COVID-19 infections road a tidal wave in Washington D.C. at the White House and on Capitol Hill. Biden-Harris administration staffers, cabinet members and members of Congress – including House Speaker Nancy Pelosi – and even D.C. Mayor Muriel Bowser all tested positive this week.

When it comes to the Republican votes, Senator Collins said of her yes vote earlier this week. “Just as I have disagreed with some of her decisions to date, I have no doubt that, if Judge Jackson is confirmed, I will not agree with every vote that she casts as a justice,” Collins said. “That alone, however, is not disqualifying.”

Senator Romney issued his statement, saying, “After reviewing Judge Jackson’s record and testimony, I have concluded that she is a well-qualified jurist and a person of honor. While I do not expect to agree with every decision she may make on the Court, I believe that she more than meets the standard of excellence and integrity. I congratulate Judge Jackson…and look forward to her continued service to our nation.”

The lone Black Republican Senator, Tim Scott, expressed before the vote that he would vote no for Jackson to sit on the high court. “The historic nature of Judge Jackson’s nomination reinforces the progress our country has made. However, ideology must be the determining factor-not identity on SCOTUS,” said Senator Scott. 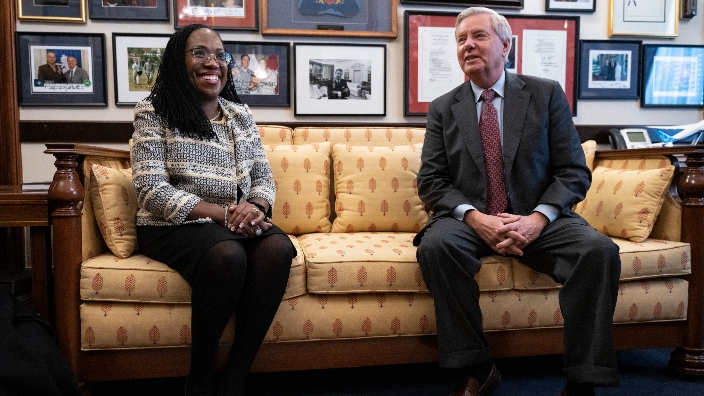 Scott, during the nomination process, supported candidate Michelle Childs for the Supreme Court. Childs, like Scott, are natives of South Carolina.

Since the start of the Senate confirmation process, several Senate Republicans made it clear that they would not support Judge Jackson. GOP members of the Senate Judiciary Committee were slammed by Democrats, the White House, and others for their contentious questioning of Judge Jackson during her confirmation hearings. Earlier this week, Senator Lindsay Graham notably said that if the Republicans held the majority in the Senate, Jackson would not have received a hearing.

On the Democratic side, Senators were ripe for a yes vote. U.S. Senator Elizabeth Warren of Massachusetts was eager to cast her yes vote. She told theGrio exclusively days before the vote, “She’s terrific. And she’s going to make a terrific Supreme Court justice for decades to come.” 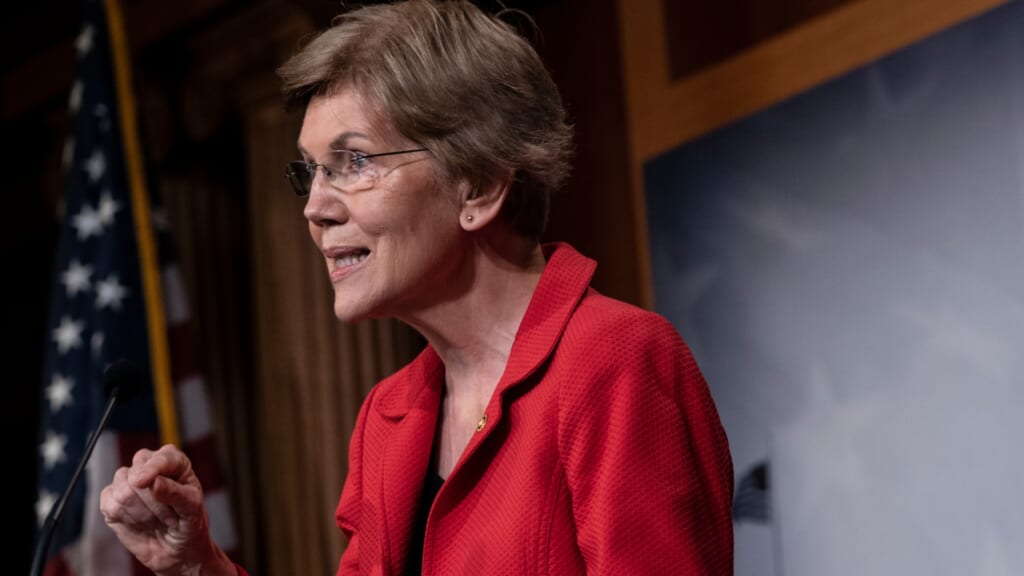 Massachusetts Sen. Elizabeth Warren is reportedly interested in becoming the new secretary of the Treasury Department should Democratic nominee Joe Biden win the presidency in next week’s election. (Photo by Drew Angerer/Getty Images)

Warren said Jackson’s unique resume is needed on the high court. “She is so qualified. She’s only the second Supreme Court justice ever to have served all three [levels of the federal court system] – at the District Court, at the Court of Appeals and now at the Supreme Court,” said Warren.

“She is going to be our first public defender, someone who has really seen law from how it gets delivered right down at the real personal level and has stood up for the constitutional principle that everyone is entitled to a lawyer. She lived that she is going to be a superb Supreme Court justice.”

April Reign, who has been pushing for a Black woman Supreme Court Justice as the co-founder of Sista SCOTUS told theGrio that she was “loss for words” over Jackson’s historic confirmation. 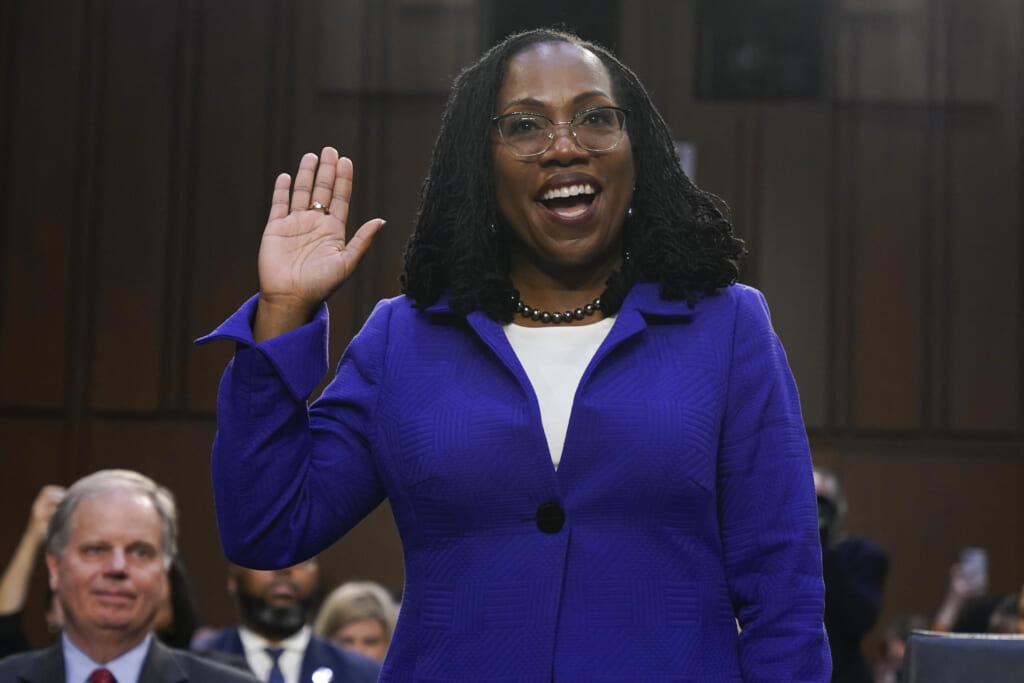 “I’m very thankful to be part of the Sista SCOTUS with my fellow Black Women co-founders. We are going to celebrate this weekend and then we are going to get back to work because there are other black women still stuck in the process of becoming judges throughout the federal judiciary. So our work is not over.”

Judge Carlos Moore, the head of The National Bar Association that represents over 67,000 Black lawyers, is “excited” to see a Black woman ascend to high scourt and said, “We know that she will serve with distinction and bring a diversity of lived experiences that no other prior justice has thus far.”