Netflix drops first trailer for Obamas’ ‘We the People’

Netflix has dropped the trailer for its educational animated series We the People, with former president Barack Obama and first lady Michelle Obama serving as executive producers on the project.

The show features 10, three-minute music video-style episodes that each address a different U.S. civics lesson. According to a press release, We the People combines music and animation to “educate a new generation of young Americans about the power of the people.”

The series is “set to original songs performed by artists such as H.E.R., Janelle Monáe, Brandi Carlile, Lin-Manuel Miranda, Adam Lambert, Cordae, Bebe Rexha, KYLE, Andra Day, and poet Amanda Gorman, with a groundbreaking mix of animated styles — each episode of We the People is an exuberant call to action for everyone to rethink civics as a living, breathing thing and to reframe their understanding of what government and citizenship mean in a modern world.”

Check out the trailer below.

In one clip, H.E.R. sings about the rights and responsibilities of a U.S. citizen, as reported by Today. In another snippet, Cordae sings about taxes, saying “Now let me start to tell y’all all about taxes. How much do you pay? Well that depends on your bracket.”

The series was created by Doc McStuffins writer Chris Nee, who will executive produce alongside the Obamas through their Higher Ground Productions company.

The Obamas’ highly-publicized Netflix deal has already been quite a success for the couple. From Michelle’s revealing Becoming documentary to their Academy Award-winning American Factory, they have certainly made an impact in the streamer’s catalog. 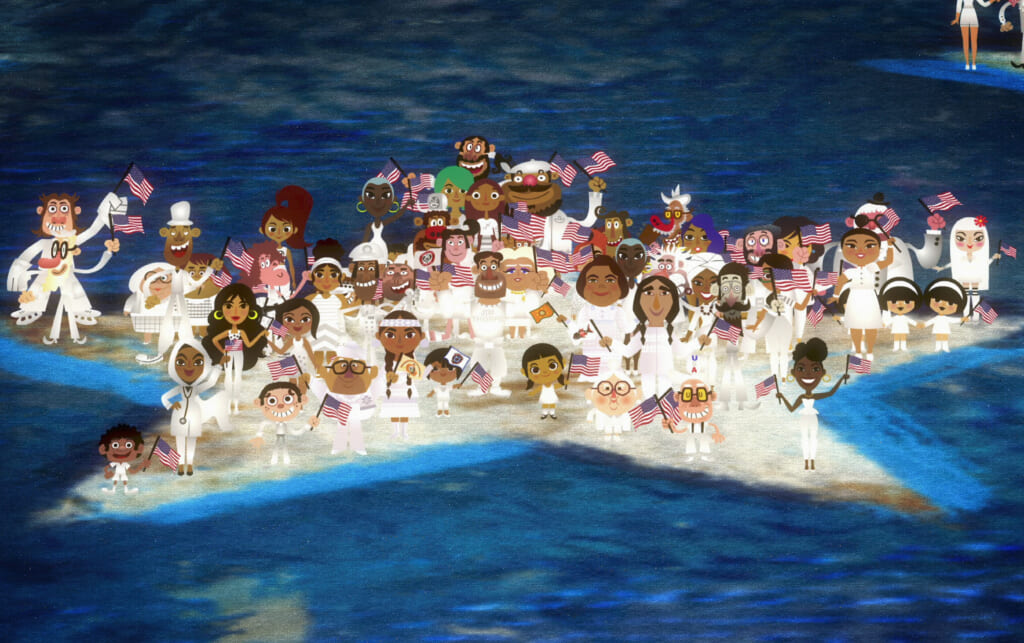 The slate of previously announced titles includes four new films including Exit West, a feature film based on Mohsin Hamid’s critically-acclaimed novel Satellite, a science fiction feature film written by Ola Shokunbi, Tenzing, a feature film based on the man who first reached the summit of Everest (Tenzing Norgay), and The Young Wife, a film from the mind of Tayarisha Poe (Selah and the Spades).

Also announced are multiple series from the company. Firekeeper’s Daughter is based on the novel of the same name by Angeline Boulley. It follows “an 18-year-old Native girl as she reluctantly goes undercover in a police investigation on her Ojibwe reservation.”

The other series is Great National Parks, a natural history docuseries that “will explore some of the most wondrous national parks and wild spaces on Earth.”

The Obamas released a statement on their upcoming Netflix content.

Barack and Michelle Obama arrive to the 59th Presidential Inauguration at the U.S. Capitol on January 20, 2021 in Washington, DC. (Photo by Saul Loeb – Pool/Getty Images)

“We created Higher Ground to tell great stories. This group of projects builds upon that goal and the incredible path forged by films like Crip Camp, Becoming, and the Oscar-winning American Factory.

From science fiction to the beauty of our natural world to the relationships that define us, Higher Ground continues to strive for fresh perspectives, compelling characters, and a healthy dose of inspiration. We couldn’t be more proud to team up with the brilliant artists behind each of these stories. Each of them has something important to say.”

Ted Sarandos, chief content officer at Netflix, spoke to his excitement about the projects.

“It has been thrilling to watch President Barack Obama, Michelle Obama and the Higher Ground team dive into original programming and produce incredible stories,” he said.

“Barack and I have always believed in the power of storytelling to inspire us, to make us think differently about the world around us, and to help us open our minds and hearts to others,” Michelle Obama previously said. “Netflix’s unparalleled service is a natural fit for the kinds of stories we want to share, and we look forward to starting this exciting new partnership.”

The Obamas secured a multi-year deal with the streaming giant and the high-profile couple will create docu-series, documentary films, and features.

We The People debuts July 4.

The post Netflix drops first trailer for Obamas’ ‘We the People’ appeared first on TheGrio.

Source: Netflix drops first trailer for Obamas’ ‘We the People’

Vinegar Hill Magazine is proud to announce that we have been granted a $50,000 award from the Borealis Philanthropy’s Racial Equity in Journalism Fund (REJ) ‘which seeks to strengthen a future where communities of color are powerful.’ The REJ does...

In a news release, Lumumba’s office said city officials discussed “plans of the federal agencies to immediately engage in negotiations” with Jackson’s leadership to address its water system needs. JACKSON, Miss (AP) — The federal government wants to work with...

Work-from-home wave may leave out most Black workers

Economic Policy Institute economist Elise Gould says work-from-home opportunities are “vastly unequal” The work-from-home craze that was sparked by the coronavirus pandemic threatens to create another segregated societal system that could put Black workers at a...

A recent survey conducted by HBCU Connect on behalf of Microsoft found that about 95% of the 200 respondents made up of HBCU students and alumni expressed interest in careers in the gaming industry. Gaming is one of the most popular forms of entertainment, yet...