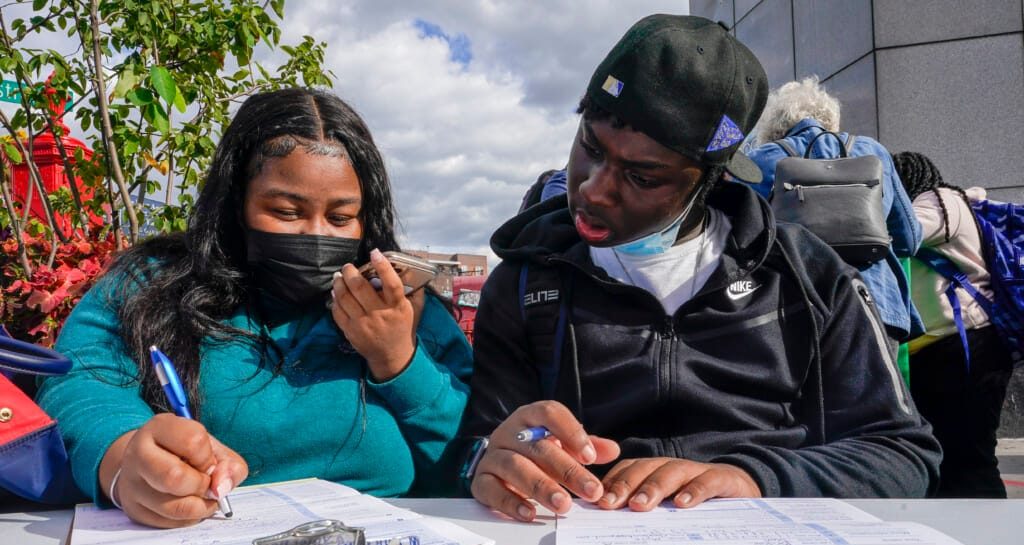 Local governments or school districts with a record of discrimination in New York must gain approval from state officials in order to pass certain voting policies.

The John R. Lewis Voting Rights Act, named after the late civil rights activist who represented Georgia in the U.S. House, makes New York one of the first states to bring back a version of a process known as “preclearance” that was gutted by a landmark Supreme Court decision in 2013.

Under the federal Voting Rights Act of 1965, states and counites with a record of suppressing the rights of Black voters once had to seek U.S. Justice Department approval before changing voting rules.

The court’s ending of that practice, on the grounds that federal oversight was no longer needed, helped clear the way for multiple states to enact new rules around voting in recent years.

Residents of the Flatbush neighborhood of the Brooklyn borough of New York register to vote at a voter registration event on Sept. 29, 2021. New York’s governor has signed a law to prevent local officials from enacting rules that might suppress people’s voting rights because of their race. (AP Photo/Mary Altaffer, File)

Now, local governments or school districts with a record of discrimination in New York must gain approval from state officials in order to pass certain voting policies.

“We’re going to change our election laws so we no longer hurt minority communities,” Gov. Kathy Hochul, a Democrat, said at a bill signing ceremony in Brooklyn.

“I’m so proud to be here to sign this landmark legislation. No state in the nation has stood up with the courage and conviction and the power we have by protecting these important rights,” she said.

The new state law will also expand language assistance for voters who don’t use English as a first language, and also provide legal tools to fight discriminatory voting provisions.

An effort in the U.S. Congress to revive parts of the Voting Rights Act failed to make it through the Senate.

Democrats who back the New York legislation said laws like it are still needed.

“Just last week, several important races around the country were won by people who deny the validity of elections and who will work to reduce access for voters,” said Sen. Zellnor Myrie.

Adam Lioz, a senior policy counsel for the Legal Defense Fund, said the organization has been working for years to push this legislation.

“We believe that this is a way for state leaders to step up and protect votes at a time where Black and brown voters are facing the biggest assault on voters rights since Jims Crow,” Lioz said.

The parts of New York required to get preclearance before changing voting laws will be determined by state officials based on a formula and list of conditions in the legislation.

Vinegar Hill Magazine is proud to announce that we have been granted a $50,000 award from the Borealis Philanthropy’s Racial Equity in Journalism Fund (REJ) ‘which seeks to strengthen a future where communities of color are powerful.’ The REJ does...

In a news release, Lumumba’s office said city officials discussed “plans of the federal agencies to immediately engage in negotiations” with Jackson’s leadership to address its water system needs. JACKSON, Miss (AP) — The federal government wants to work with...

Work-from-home wave may leave out most Black workers

Economic Policy Institute economist Elise Gould says work-from-home opportunities are “vastly unequal” The work-from-home craze that was sparked by the coronavirus pandemic threatens to create another segregated societal system that could put Black workers at a...

A recent survey conducted by HBCU Connect on behalf of Microsoft found that about 95% of the 200 respondents made up of HBCU students and alumni expressed interest in careers in the gaming industry. Gaming is one of the most popular forms of entertainment, yet...