Star Trek actress Nichelle Nichols appeared at the Los Angeles Comic-Con this past weekend as part of a three-day farewell celebration to honor the star whose pioneering role on a single TV show helped inspire generations of Black space fanatics and science nerds.

Nichols — who will turn 89 on December 28 — is suffering from dementia and is at the center of a conservatorship battle between her son, Kyle Johnson, and former manager Gilbert Bell. 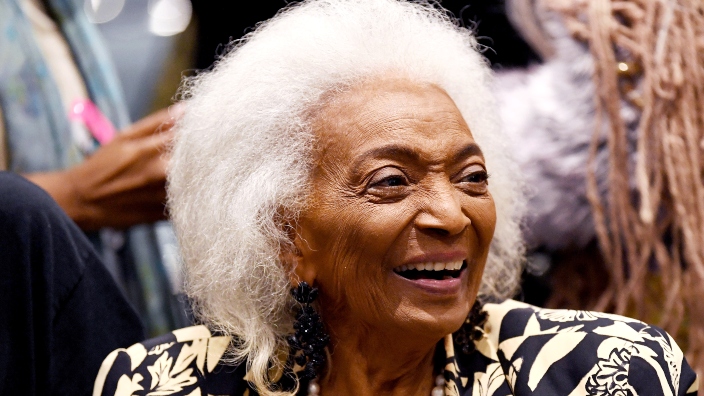 She was joined at the convention by Johnson, who served as her spokesperson, as well as her younger sister, Marian Michaels. Actresses Judy Pace and Beverly Todd joined Nichols, too, as did former astronaut Mae Jemison — the first Black woman to go into space. Jemison joined NASA after being recruited by Nichols, who used her Star Wars fame to recruit women and minorities into the space program in the 1970s and 1980s.

In her role as Lt. Nyota Uhura in the iconic original Star Trek series, which debuted in 1966, Nichols was one of the first Black women with a prominent co-starring role on network television. In 1968, she and show star William Shatner’s Captain Kirk character shared the first interracial kiss ever seen on TV. Not only was she seen on the series, she was also featured in six of the Star Trek films, and voice acted in at least one cartoon.

After the cancellation of the series, Nichols was asked by NASA to volunteer for a special project from the space agency, and was instrumental in recruiting Jemison, Dr. Sally Ride — the first American female astronaut — among others.

According to People, during the convention, Nichols signed autographs, posed for photos and attended an early birthday celebration. Several tribute panels dedicated to her life and career were convened; however, she didn’t make any public statements.

“One of the things that you’ve heard everyone say when they talk about meeting and spending any time in Miss Nichelle Nichols’ presence is warmth and generosity,” said Jemison. “And you feel like you’ve known her because she is that real, not just relatable, but that important and sentient in our lives.”

During a farewell panel on Sunday, NASA Astronaut Appearance Specialist Denise Young awarded Nichols with the agency’s Exceptional Public Achievement Medal. According to People, the actress rose from her wheelchair to accept the award and received a standing ovation.

“A life well lived is reward enough, every day, and my mother’s certainly had a life well lived in many respects,” Johnson told the audience. “This is an exceptional recognition, and I’m, of course, very proud of her for all that she’s done and the value and the meaning of her work. Not just as an actress, but very real and important work that she inspired and enabled people to understand.”

In a 2011 interview reprinted by the official Star Trek blog in 2018, Nichols recalled that she actually resigned from Star Trek early on in its run. She said that the very weekend she turned in her letter of resignation, she was approached by Dr. Martin Luther King, Jr. at an NAACP fundraiser, and he told her, “Ms. Nichols, I am your greatest fan.” The civil rights leader begged her to stay on the show, saying, “When we see you, we see ourselves, and we see ourselves as intelligent and beautiful and proud.”

Nichols said she went back to the show on Monday morning and recounted the story to the show’s creator Gene Roddenberry, who wept with gratitude.

Just read about Nichelle Nichols final Comic Con appearance recently. She was richly honored at the event. So many people made a real effort to honor her & it was well deserved. She inspired so many.FOR NICHELLE pic.twitter.com/bANUWHWJSP

I just read some amazing stuff. 1) Dr. Martin Luther King, Jr. was a Star Trek fan.2) Nichelle Nichols was going to quit Star Trek and go back to Broadway, her first love. He convinced her to stay during a chance encounter because her representation was so important.

Sonequa Martin-Green, who plays the first African American female captain on a Star Trek series, Star Trek: Discovery, referenced that interaction in a video tribute, saying, “Nichelle’s legacy can be described as that of sacrificial, heroic contribution.”

“She decided to stay and ultimately devoted her entire self to the progression of Black people, people of color and women,” said Martin-Green. “And she gave everything. She gave her time, her energy. She gave her intelligence, her wisdom, her leadership and her heart for the betterment of the world and the future. I am only here because of her.”

Have you subscribed to theGrio podcasts “Dear Culture” or “Acting Up?” Download our newest episodes now!TheGrio is now on Apple TV, Amazon Fire and Roku. Download theGrio.com today!