Protests continue outside of D.C. bar after a woman is dragged down stairs by her hair

An apparent case of mistaken identity led security to physically assault a woman they believed broke the rules at Nellie’s bar, a popular LGBTQ+ club in the nation’s capital

Nellie’s Sports Bar located in the Shaw neighborhood of Washington D.C. is under fire after a video went viral showing a security guard dragging a Black woman by her hair down a flight of stairs.

Protestors are now camped outside the establishment, calling for the popular LGBTQ+ bar to be shut down for good. The demonstrations started around 6:30 p.m. Sunday, with dozens of people rallying behind Keisha Young, 22, of Maryland, the woman seen being dragged out of the bar in video that was shared on Instagram. 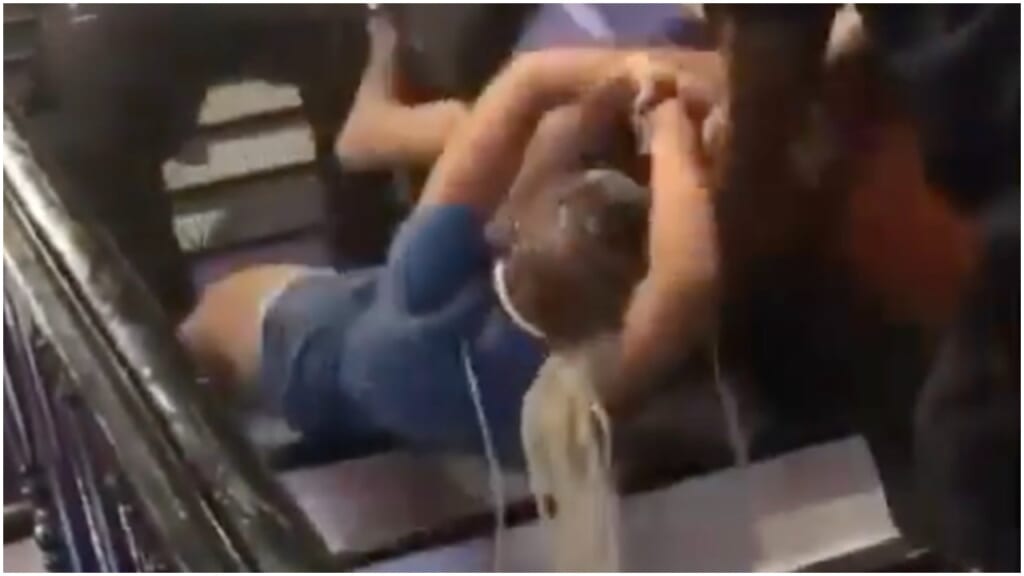 Below is the graphic video that was shared with WUSA9. Young told the outlet that she did nothing to warrant the mistreatment during her visit to celebrate Pride month.

Young appreciates the support from people who are joining her call to shut down Nellie’s. Dozens of demonstrators have also gathered outside the home of the bar’s owner, Doug Schantz.

“I didn’t expect it to turn into something like this, to be honest, but I’m feeling very warm that a lot of people are out here helping support me,” Young said.

The video was posted to Instagram by Black Lives Matter DC, which organized the protest outside the bar. Young, who attended the demonstration, told WJLA that “an apology is not going to get rid of the bruises on my body.”

The Capital Pride Alliance issued a statement Monday afternoon condemning the “reprehensible actions taken by Nellie’s staff over the weekend.”

“The incident resulted in Keisha Young being dragged by the hair down the stairs, which was a violent response to the trivial action of allegedly bringing into the bar a bottle of liquor,” Capital Pride Alliance said. “Pride weekend is a time for celebration and remembrance, and this incident is a reminder that we need to do a better job of protecting one another.”

Keisha Young, 22, of Md., says she was the woman seen being dragged out of Nellies in that viral video on IG. When I asked her what should happen next, she said, “I want them gone”. (@wusa9) pic.twitter.com/ZkwxnSWZqU

D.C. Black Lives Matter organizer Preston Mitchum said protesters were “tired of Nellie’s only caring about the Black dollar but not Black bodies.” He added, “We’re fed up.”

“We need to remember that Pride was a riot,” Mitchum said in a video posted to Twitter by journalist Chuck Modi. “The first Pride that we know of as Stonewall was a riot led by Black people and brown people.”

Nellie’s released the following statement on Instagram amid the protest: “We were incredibly upset and disturbed to see the unfortunate event that took place at Nellie’s last night. We are undergoing a full investigation of the situation. At Nellie’s, we foster an inclusive and safe environment, so events like this are completely unacceptable to us.”

Nellie’s later updated that statement by saying that they had terminated the security company responsible for the incident, who were contracted to work at the bar. Their updated post read:

“Nellie’s Sports Bar has terminated, with immediate effect, the independent security vendor hired to protect our guests during Pride Week. Our investigation into the matter is ongoing, and we will cooperate with any law enforcement investigation, however, we do not need to wait for the investigation’s conclusion before we take decisive action. We offer a heartfelt apology to all who witnessed the horrific events of this past weekend. No matter what behavior occurred prior, nothing warrants mistreating, and disrespecting, one of our guests.

What we can say is we have heard the concerns of the BIPOC and LGBTQ communities. Nellie’s will be closed this week as we evaluate this regrettable situation, though we will continue to pay all non-security staff their normal wages. In the interim, we will use this time to listen and understand what more we can do to create the safe and friendly atmosphere our guests have come to expect from Nellie’s Sports Bar over the past 14 years.”

The post Protests continue outside of D.C. bar after a woman is dragged down stairs by her hair appeared first on TheGrio.

Source: Protests continue outside of D.C. bar after a woman is dragged down stairs by her hair