Republicans on the Senate Banking Committee have derided three diverse Federal Reserve Board nominees since the process began.

Republican Senators were a no show at an executive session to vote on the federal reserve board nominees. Senator Sherrod Brown, the chairman of the committee, blasted his GOP colleagues and said the Senators “have fled the room, hiding rather than voting.”

Republican Senator Pat Toomey of Pennsylvania announced on Tuesday he would not attend the markup for the Federal Reserve nominees. Toomey and other Republicans on the Senate Banking Committee have derided three diverse Federal Reserve Board nominees since the process began.

Reports that the GOP members of the committee considered boycotting committee votes on the nominees launched the verbal attacks exhibited in hearings into active attempts to derail the process. 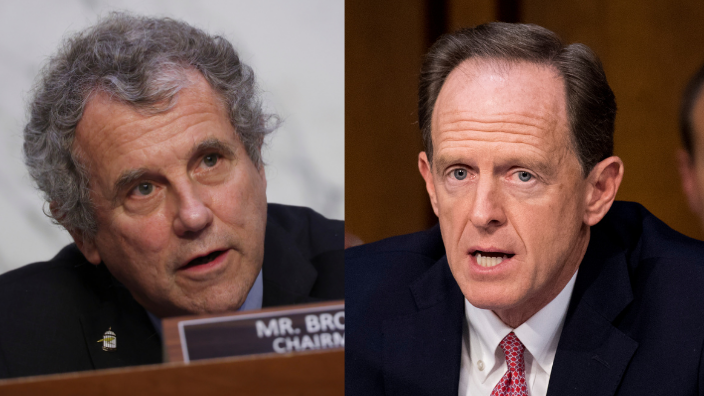 “Americans depend on us to get these nominees on the job as soon as possible,” Senator Brown said in a scathing statement. “Any actions to delay this vote will hurt workers, their families, and our recovery.”

With all 12 Republicans sitting out, the committee lacked a quorum to move forward. However, the remaining committee members — all Democrats — took a unanimous unofficial vote before adjourning.

Toomey told reporters that he told Brown “that if he wishes, he can proceed with five of the six nominees that he had intended to have a vote on. Republicans will attend. We will vote. Actually a significant majority of them will pass with Republican support if he were to do that. Or he can have none. And that’s his choice. So we’ll see what he decides this afternoon.”

TheGrio reached out to the committee chair’s office for comment. According to a spokesperson for the chairman, “Their theatrics will just mean a delay, not an outright defeat for any of these noms.”

Lisa Cook, the first Black woman nominated to the post, Sarah Bloom Raskin, a returning woman governor, and Philip Jefferson, a Black man, await confirmation and have undergone a series of scrutiny before the committee throughout this month.

While Toomey singled out Bloom Raskin as the main nominee the GOP refused to vote on, members of his party have targeted Lisa Cook as well.

Lisa DeNell Cook, nominee to be a member of the Federal Reserve Board of Governors, is sworn in during the Senate Banking, Housing and Urban Affairs Committee confirmation hearing on February 3, 2022 in Washington, DC. (Photo by Bill Clark-Pool/Getty Images)

Despite the attacks, economic experts at the Roosevelt Institute contend that the promise of a fair and inclusive economy hangs on the confirmation of these nominees.

Ali Bustamante, deputy director of the Education, Jobs & Worker Power program at Roosevelt, told theGrio Lisa Cook would bring one of the strongest backgrounds in economics to the Federal Reserve Board.

“She’s not a specialist in financial markets,” Bustamante explained. “Instead, she’s truly looking at macroeconomics. She is looking at how the economy nationally performs, and the distributional impacts of that performance.”

Many of the people who have been on the Federal Reserve Board are experts in financial markets and business, but lack economic training. Republicans have pushed Cook on this specifically and have accused her of misrepresenting her qualifications for the position.

“That’s one of the issues that we continue to solidify — this perspective that is completely wrong, which is that the financial markets are the economy,” Bustamante added.