OPINION: The comedy documentary delves into the less glamorous side of life as a comedian in an insightful fashion.

There was a fairly brief era of my life where, because of the success we had with Very Smart Brothas (VSB), I decided to take a shot at being a stand-up comic. A vast majority of the things Damon Young and I wrote at VSB were intentionally insightful and intentionally funny. We both realized early that taking a comedic approach to societal issues, where appropriate, was our bread and butter.

With this new goal in mind, I started studying comics like Richard Pryor and Eddie Murphy, of course, but also the ones whose bits particularly tickled my fancy, like Gary Gulman, Mitch Hedberg and Patrice O’Neal, among others. I got religious about studying structure, timing, etc. I started looking into comedy open mics in Washington, D.C., where I could get up on stage and try out this killer three minutes I was working on. I never did get on stage as a comic, but that didn’t change my interest in and appreciation for the craft and study of comedians.

Such brings me to the documentary Dying Laughing (released in 2016), which is currently streaming on theGrio TV and theGrio’s streaming mobile app. Despite featuring a litany of your favorite comedians (from Chris Rock and Kevin Hart to Bob Saget, Tiffany Haddish, Sarah Silverman, etc.; everybody’s in this documentary), this 1 hour and 20 minutes isn’t very funny. But that’s almost the point; it’s a film about the life of comedy and what it looks like day-to-day and what kind of person it requires you to be to both participate in and succeed as a comedian, which includes dealing with hecklers (which was particularly enlightening) and most insightfully, bombing.

If you are ever involved in creative endeavors, the idea of bombing (in your particular arena) isn’t foreign. When I write articles, especially ones where I am taking a stance where there is a significant division or creating an entirely new stance, I think about how it might be received. And because of social media, the negative responses come quick, fast and in a hurry. I imagine it’s like that with artists of all stripes; nobody hits on all cylinders at all times. But from listening to the comedians, there’s something especially deep about bombing as a comedian. One comedian, in particular, pointed out that it’s almost as if the audience hates YOU as a person. They don’t just hate the jokes or what you have on; they hate you. They’ve decided at that moment that you, as a person, are not worth listening to.

Consider that comedians are the masters of their own destiny. You live or die by the jokes you tell, and because it’s literally “thinking out loud for a living” and the validation of those thoughts either comes back immediately in the form of laughter (or desired interaction, i.e., gasps, groans, etc.) or silence, the pain or pleasure is swift. Several comedians interviewed spoke about how a bad set and being booed or heckled off stage would often sit in their psyche; the loneliness of a bad show takes up rent in their heads. It’s the kind of stuff that could make you quit. It’s truly fascinating hearing these successful people talk about the fears and downsides of the job.

Which brings me to the Royale Watkins, who isn’t a name that immediately rings a bell, but who I recognized (after a few rewinds) as Telly from Deliver Us From Eva, the 2003 movie starring Gabrielle Union, LL Cool J, Duane Martin, Essence Atkins and Megan Good, among others. Royale shares about a time on stage when he bombed so badly (in front of Michael Jordan, Bo Jackson and Richard Dent) and how in a fit of not knowing what else to do, he just put the microphone back on the stand and walked off the stage.

Now, that doesn’t sound that evocative on its own, but when you realize he’s telling this story through literal tears,  you can feel the pain he felt. This man’s recollection of that evening brought him to tears during the filming of his segment. I had to stop it because it was drawing emotions in me. You think of comedians getting up on stage, people laugh, and all is well, but there is a significant emotional toll to getting up on a stage and sharing and then people effectively telling you that you suck and don’t belong there.

He mentions how Bernie Mac graciously got up there and brought him back out, and the crowd applauded, but that one memory was so painful for him, it’s amazing he continued in the profession. He’s quite successful, mind you; he’s even currently a writer on the show A Million Little Things and has done plenty, but the three minutes where he talks about bombing was powerful. I rewound it several times to really zero in and appreciate what he was sharing.

So yeah, check out Dying Laughing if you haven’t. I had never heard of it, and now I’m glad I watched it. Come for Chris Rock, Jerry Seinfeld and Kevin Hart and stay for the honesty, realness and insights on what it’s like to be a traveling comedian. 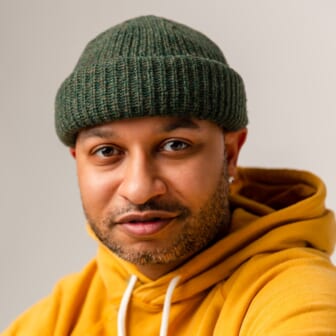 Panama Jackson is a columnist at theGrio. He writes very Black things and drinks very brown liquors, and is pretty fly for a light guy. His biggest accomplishment to date coincides with his Blackest accomplishment to date in that he received a phone call from Oprah Winfrey after she read one of his pieces (biggest) but he didn’t answer the phone because the caller ID said “Unknown” (Blackest).

The post The 3-minutes of ‘Dying Laughing’ where Royale Watkins talks about bombing makes the whole thing worth watching appeared first on TheGrio.

Source: The 3-minutes of ‘Dying Laughing’ where Royale Watkins talks about bombing makes the whole thing worth watching