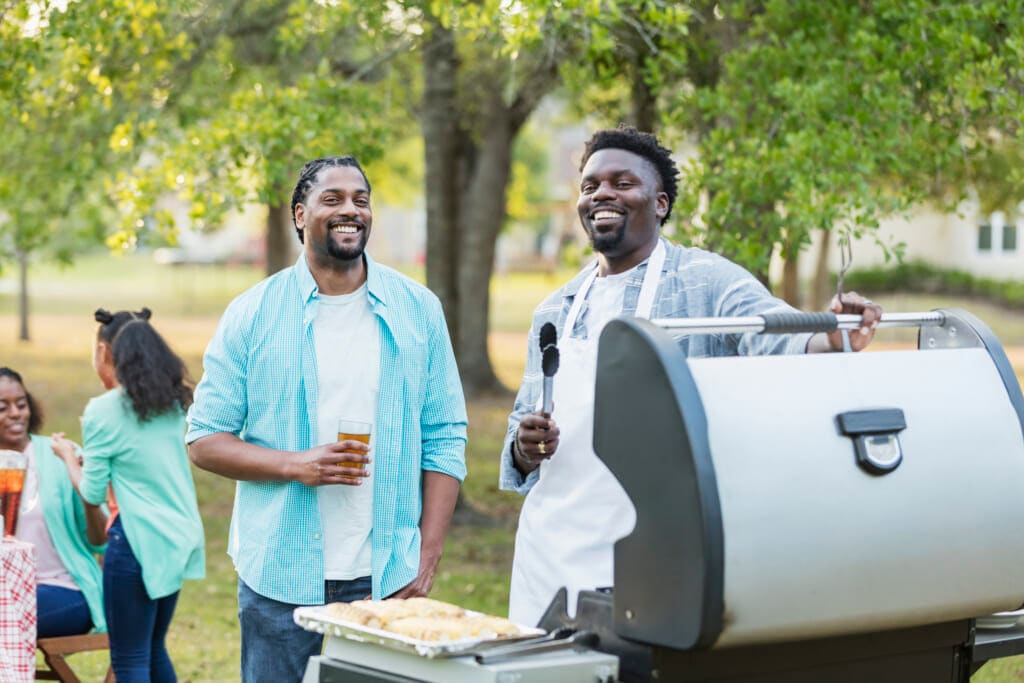 OPINION: For the first time in two years, the Black Legislative American Cookout Council opens the cookout season with an update on the best practices for Black barbecues.

Across Black America, people who own at least two family reunion T-shirts have wondered if this Memorial Day will signal the official opening of Cookout Season. Although the 2020 and 2021 cookout seasons were both canceled because of COVID restrictions, we know cookout season officially opens on Memorial Day and extends through the end of the last HBCU homecoming game.

For more than 400 years, the Black Legislative American Cookout Council (BLACC) has convened at a secret location to keep grillmasters, deviled egg makers and Kool-Aid chemists appraised of the most recent developments in the field of cookoutery. We sent our reporters to the steps of the Lincoln Memorial* where BLACC recently held its annual opening press conference to announce the rules for the 2022 cookout season.

(*Not that Lincoln Memorial. This was held on the steps of Bessie and Jerome Lincoln’s house, the couple whose 1983-2001 run still holds the record for most cookouts hosted without running out of aluminum foil.)

As usual, these guidelines have been voted on by a panel of experts that includes:

Roger “The Joker Holder” Muhammad: The only person in America who has played more than 500 games of Spades without ever being set.Alicia Green: The youngest woman to ever earn approval from the Aunts, Uncles and Neighbors Trust In Eating Society (AUNTIES).Joyce Shirley Jenkins: A board-certified candy lady for more than 30 years.James “Clyde” Green: He was Alicia’s ride, so they let him vote. Your grandma: Your grandma.

Here’s a rundown of the major decisions:

The first announcement answered the most pressing question of the year: Will Juneteenth become the first federal holiday added to the list of High Holy Cookout days since Howard Homecoming?

In a stunning decision, the executive committee tabled the discussion. Since Juneteenth also falls on Father’s Day weekend this year, a planning committee will research the issue and decide whether or not they should ask dads to share their day of recognition. According to the minutes of the last meeting, Black fathers were set to give up Father’s Day until they realized that meant they’d have to cut the lawn, prepare the barbecue sauce and work on the grill on Juneteenth. How could they honor the ancestors by working for free on their day of rest?

The decision was tabled until 2024 when Juneteenth falls on a Tuesday.

Although cookouts take place outside, BLACC conceded that Black America has been hit hard by the coronavirus and took steps to ameliorate the danger with new COVID restrictions that include:

Plate line protocol: While the rules governing the order of serving have been in place for more than 100 years, they will strictly enforce the order of serving: Elders first, followed by pastors, deacons and saints of God, then tree shade mechanics/candy ladies and finally, nieces and nephews. Sharing: No cups, plates or eating utensils shall be shared, regardless of familial relationship. Brown liquor is excluded. (Uncle Junebug says brown liquor kills germs.)Sweatrag safety: All sweatrags must be safely tucked in a back pocket. Any sweatrag found on a table will be immediately discarded. The grillmaster always has the right to keep his sweatrag draped on his shoulder. Two macaronis: To maintain social distancing, two separate but equal pans of macaroni and cheese shall be simultaneously served at all times.Gameplay: All Spades, dominoes and Uno tables must be large enough to provide social distancing. Sadly, they must ban all sticking of the big joker on foreheads.

The committee voted to extend their ban on white people. They promised to hold another vote when, as the press release said, “white people start acting like they got some sense.”

Other people banned from the 2022 cookout season:

Paula PattonAnyone who tries to “do too much” with their potato salad recipeCandace Owens (will also revisit in 2032.)Anyone who thinks vaccines enlarge testicles, include a tracking device or give them 5G cellular serviceWhoever wrote that last episode of AtlantaEmpty-handed people

BLACC is dedicated to inclusion and added plant-based meat on the official 2022 menu on a trial basis. They’re tired of that “pesk-atarian” cousin who wants everyone to know they stopped eating meat by asking: “Any vegan burgers?” While the Beyoncé remake is optional, Maze featuring Frankie Beverly’s “Before I Let Go” will remain on the official cookout playlist.Because of the increase in the price of gas, the number of people who are asked to bring ice will be doubled this season to prevent anyone from having to run to the store.Unless the host has an official declaration of hierarchy, it’s joker, joker, ace.Although BLACC does not condone body shaming, all hoochie daddies will be required to sit down in a folding chair to ensure that their “stuff” ain’t popping out of their shorts.We will hold a brief moment of silence for those affected by recent violence…at the Oscars.To prevent muscle and spine-related injuries, we are asking all elders to stretch before engaging in any TikTok dances with younger family members. While many states have legalized marijuana since the last cookout season, the designated smoking area is still “waaaay over there.” However, if your cookout is held in a state where weed is legal, feel free to roll up at the domino table.You can put a draw two on top of a draw two.

A Brief Word About the Juneteenth Ice Cream

In a separate statement, BLACC condemned all corporate displays of profiteering off Juneteenth. They noted how they always have to hear about how white people love MLK every January and drink out of fast food cups emblazoned with Black fists every February. Although they didn’t specifically mention Walmart, the closing prayer included a special request asking Jesus to look over anyone who eats Great Value Ice Cream.

The Black Legislative American Cookout Council was founded in Virginia in 1619 when Charles James heard a rooster crow as he sat hungry by the fire, looked at his homeboy, and said: “Are you thinking what I’m thinking?”

Michael Harriot is a writer, cultural critic and championship-level Spades player. His book, Black AF History: The Unwhitewashed Story of America, will be released in 2022.

The post The official rules and revisions for the 2022 cookout season appeared first on TheGrio.