OPINION: Ifeoma Ike, who previously worked on the mayoral campaign of Dianne Morales, says as a senior advisor she believes Maya Wiley is the best woman for the job.

A lot of people call this political season “messy.” I call it a beautiful struggle. When I agreed to be the senior advisor to NYC mayoral candidate Dianne Morales, most of my peers didn’t believe I had enough time to help transform a campaign many people still didn’t know existed.

What many don’t know is that I said “yes” when both my parents were ill with COVID-19. Both essential workers, I was haunted by the thought that news of effective vaccinations came too late for my working-class, immigrant family. And for full transparency, it took a month for me to commit to any electoral work; not only because of the crowded field, but also because I was disappointed at the lack of our city’s investment in educating all communities about rank choice voting.

What motivated me to join was that I knew our people deserved more than the status quo: a platform willing to reach the root causes of race and gender inequity that the majority of New Yorkers are experiencing. As a former City Hall executive deputy director and a lawyer, I also knew that we needed a mayor who truly understood the city and possessed a record of building justice-minded infrastructure, not just using social justice language.

Like many political operatives, early mornings and late nights was my daily campaign routine. I’m also the CEO of a social impact startup with a team of nine people; working two full-time jobs requires a lot of coffee. The entire season has been a struggle: some progressive spaces loved our platform, but questioned our viability; the press failed to cover the buildup of our transformative campaign; and for the longest, it was only eight of us building a full operation.

But what we didn’t miss was our people.

We remained on the ground, even during a pandemic, supporting mutual aid efforts, providing resources to young mothers in need of childcare and signing up seniors for vaccinations — while also competing in a rigorous cycle of forums, fundraisers and events. The thought of running politics as usual never crossed our minds, and the more we met the community where they were, the more we were able to connect them with a vision that put those left behind at the center.

This is also why this past week has been so painful to experience. What took other campaigns a year to achieve, our scrappy team accomplished in five months. Endorsements and increased media coverage were welcomed affirmations, but it’s really the family we built that I’m forever grateful for, especially my fellow Black femmes and immigrant and first-gen siblings.

But like so many things began to fall apart in the public eye, and I walked away from a campaign I helped build, I reminded myself that politics, in itself, isn’t the movement. People are. No one candidate possesses all of the solutions. And in the most transformative political season of our city, no one can afford to sit on the sidelines, including me.

Exhausted, but still determined, I am proud to join Maya Wiley’s mayoral campaign team as a senior advisor because the moment calls for the wide tent of progressives to coalesce and model something different. Maya and I don’t agree on everything, and recently had a 21-minute debate over how much the NYPD should be defunded. I argued that the police state is pervasive not only in our streets, but in our schools and childcare systems and that defunding by $3 billion is where we need to start. 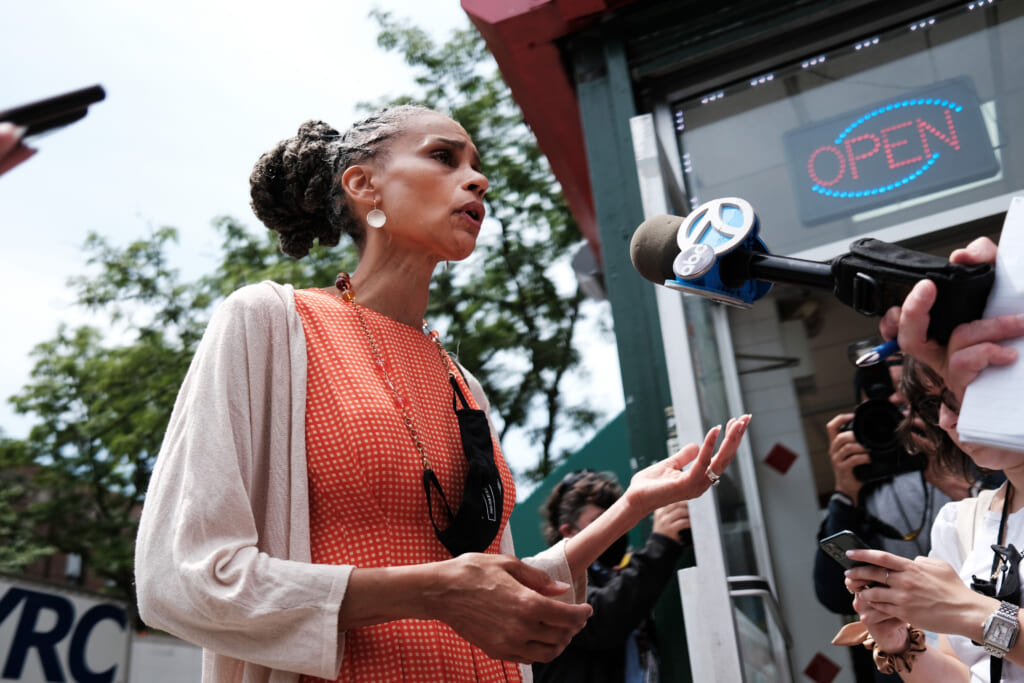 Maya didn’t disagree, substantively, and shared that $1 billion is where she’d start, followed by a full audit to determine how and where to divest from. I pushed back, sharing how communities feel betrayed by the current administration’s “tale of two cities” rhetoric that ultimately expanded policing, even while we were quarantined.

“And that’s why I’ve invested so much time into a safety strategy, Ify, and we’re rolling out our housing platform that I think you’d like,” she said.

That simple statement revealed two key things: that Maya understands that our communities are not falling for more failed promises; and that we share an understanding of safety beyond policing. And after viewing her recent video reminding us of the brutal tactics employed by NYPD on protesters last summer, I fully believe our city under her leadership can mobilize to fight the police union and confront practices originally engineered to target Black bodies.

Maya is, indeed, our city’s best chance at stopping the many special interests that continue to marginalize Black and Brown communities — the very communities that kept us alive last year.

Outside of this race, Maya was a mentor to those of us who worked inside City Hall and endured frequent misogynoir as we tried to advocate for our people. Maya helped advance many of my team’s projects and she and I co-drafted the city’s first-ever Equity Executive Order. When I organized a space for women of color at City Hall just to breathe during the workday, I asked Maya if she had time in her busy schedule to speak. She came in like the rest of us, plopped in the chair, and exhaled “Whew, y’all I am tired!” to which we each chimed in our agreement in our own unique, sisterly way.

That memory is not easily erased from my mind, and with every debate we have on policies, I also know her character and the space she has provided me in moments of stress and frustration. That matters.

Time for us to get behind Maya Wiley and rank her number one.

Ifeoma Ike is an activist, CEO of social impact and equity firm, Pink Cornrows and creator of the Black Policy Lab. She is the former senior advisor to Dianne Morales for NYC.

The post The time for progressives to get behind NYC mayoral candidate Maya Wiley is now appeared first on TheGrio.

Source: The time for progressives to get behind NYC mayoral candidate Maya Wiley is now