Thousands of Haitian migrants forced to gather under Texas bridge

More than 9,000 migrants, primarily from Haiti who’ve been affected by a series of natural disasters, were being held in a temporary staging area in Del Rio, Texas.

According to reports from the U.S. Border Patrol, more than 9,000 migrants, primarily from Haiti who’ve been affected by a series of natural disasters, were being held in a temporary staging area in Del Rio, Texas.

It was initially just a few hundred individuals earlier in the week, The New York Times reports.  The Border Patrol insists they will have additional agents “to immediately address the current level of migrant encounters and to facilitate a safe, humane and orderly process.”

The shaded area under the bridge where the migrants are being held should “prevent injuries from heat-related illness” as more migrants are processed. 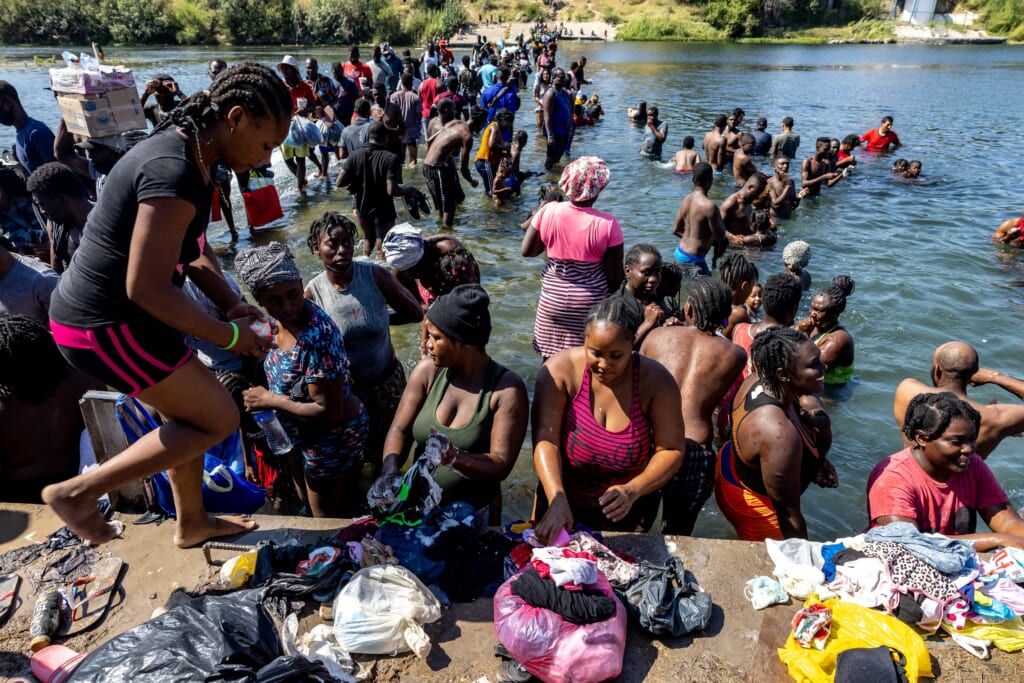 Migrants wash their clothes in the Rio Grande River near a makeshift encampment under the International Bridge between Del Rio, TX and Acuña, MX on September 17, 2021 in Del Rio, Texas. (Photo by Jordan Vonderhaar/Getty Images)

“The Biden administration is in complete disarray and is handling the border crisis as badly as the evacuation from Afghanistan,” Abbott said.

Del Rio’s Mayor, Bruno Lozano, also spoke out, commenting on the conditions the migrants are subjected to. There’s minimal access to clean water and food. There are just a few dozen portable toilets available.

“There are 9,000 people really anxious and stressed,” Lozano said. The city of Del Rio currently has a population of an estimated 35,000 residents.

The Del Rio border sector has been the site of much migrant traffic this year. In June, many were caught illegally crossing the border, twice as many as in May. The numbers continued to rise month to month.

The government has plans to fly some of the migrants to other parts of the border that aren’t as overpopulated as Del Rio. Return flights to Haiti are also in effect, currently scheduled to begin on Monday, Sept. 20. Biden’s administration hopes this will encourage other Haitians to try not to cross the southern border.

Migrants walk across the Rio Grande River carrying food and other supplies back to a makeshift encampment under the International Bridge between Del Rio, TX and Acuña, MX on September 17, 2021, in Del Rio, Texas. (Photo by Jordan Vonderhaar/Getty Images)

Victor Escalon, the South Texas regional director for the state’s Department of Public Safety, has spoken of the arrests made for criminal trespassing of illegal migrants, which he says has overwhelmed the local jails.

“We have to put the pressure and deter the activity,” he said. Escalon is leading Operation Lone Star, a program created by Gov. Abbott that allows him to send resources and state agents to border communities.

Tiffany Burrow, the operations director for the Val Verde Humanitarian Border Coalition’s migrant respite center, said the city just cannot accommodate as many migrants that have been coming in.

“We can’t help that many people,” she said. “The city is not going to sustain all these people. The city under the bridge could become bigger than Del Rio.”

Usually, the group helps an estimated 300 migrants a day. They assist with connecting them with transportation to their final destination in the U.S.

Unfortunately, the conditions remain the same. The thousands of migrants have access to just 22 portable toilets. There is no running water.

The report notes that migrants typically feed themselves with food purchased in Mexico, which they get by running back and forth across the Rio Grande. They sleep in packed dirt beneath the bright with minimal lighting.

The post Thousands of Haitian migrants forced to gather under Texas bridge appeared first on TheGrio.