The limp from his surgically repaired right leg grew more pronounced with each deliberate, cautious step.

AUGUSTA, Ga. (AP) — Tiger Woods used to turn weekends at Augusta National into gripping theatre, relentlessly charging up the leaderboard one fearless drive, one feathery iron, one nervy putt at a time.

Not now. Maybe not ever again.

The magic the five-time Masters champion summoned so easily for so long was nowhere to be found during another labored four-plus hour journey underneath the Georgia pines on Saturday. His 6-over 78 marked his worst in 93 career rounds at the tournament he has come to define and left him at 7-over.

The limp from his surgically repaired right leg growing more pronounced with each deliberate, cautious step, the 46-year-old slipped further down the leaderboard to end whatever chance — however unlikely — of being a factor come late Sunday afternoon. 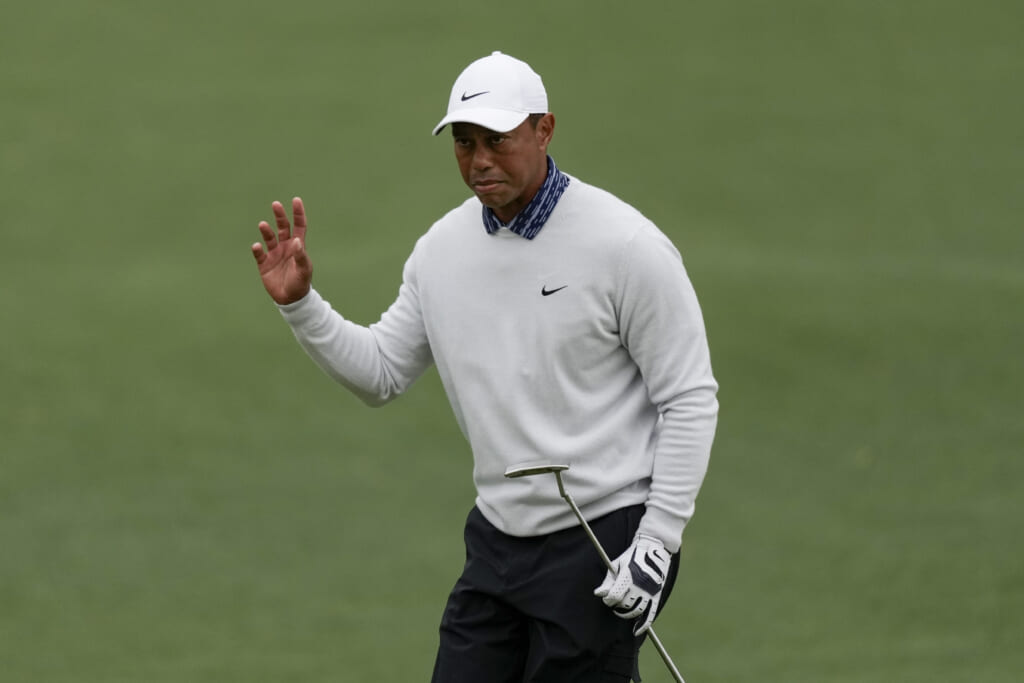 Tiger Woods waves after a birdie putt on the second hole during the third round at the Masters golf tournament on Saturday, April 9, 2022, in Augusta, Ga. (AP Photo/Matt Slocum)

There was no familiar charge in the early April chill. Just the reality that 14 months removed from a serious car accident that threatened to end his career, Woods can still play golf. He just can’t do it — at least not at the moment — at the level needed to compete in a field consisting of younger players, many who grew up idolizing him but have long outgrown standing in awe of him.

Following a gritty back-nine push on Friday that helped him stay on the fringe of contention, Woods walked to the first tee Saturday two hours before the leaders. Looking to send a jolt through the gallery that stood five-deep in places hoping for a glimpse and a chance to roar, Woods instead spent most of the afternoon silently glaring at the hole or his putter — or both.

He three-putted the par-4 first from 54 feet for a bogey, a sign of things to come. On the par-4 fifth, he slung his club in disgust after his approach drifted to the right, far away from a back left hole location. His lag attempt from 60-feet over a ridge was well short. His 9-foot par putt rolled his 3-feet by and his comebacker for bogey hit the hole and bounced out. It was Woods’ first four-putt at the Masters — ever.

Things never really got better. Three more three-putts followed on an afternoon where nothing really felt right. And it wasn’t just his leg. It was his back. His hands. His posture. Everything.

Even worse, there seemed to be no way to compensate. He tinkered, the kind of searching usually reserved for the practice range, not in the middle of a major.

“As many putts as I had, you’d think I’d have figured it out somewhere along the line, but it just didn’t happen,” he said.

While Woods was slowly making his way up the 18th fairway, leader Scottie Scheffler — just 25 and the world’s top-ranked golfer — was making the turn doing at the Masters what Woods has done so often over the last quarter-century: imposing his will on the course and the tournament.

“We all wish we had that two, three-month window when we get hot, and hopefully majors fall somewhere along in that window,” Woods said. “We take care of it in those windows. Scottie seems to be in that window right now.” 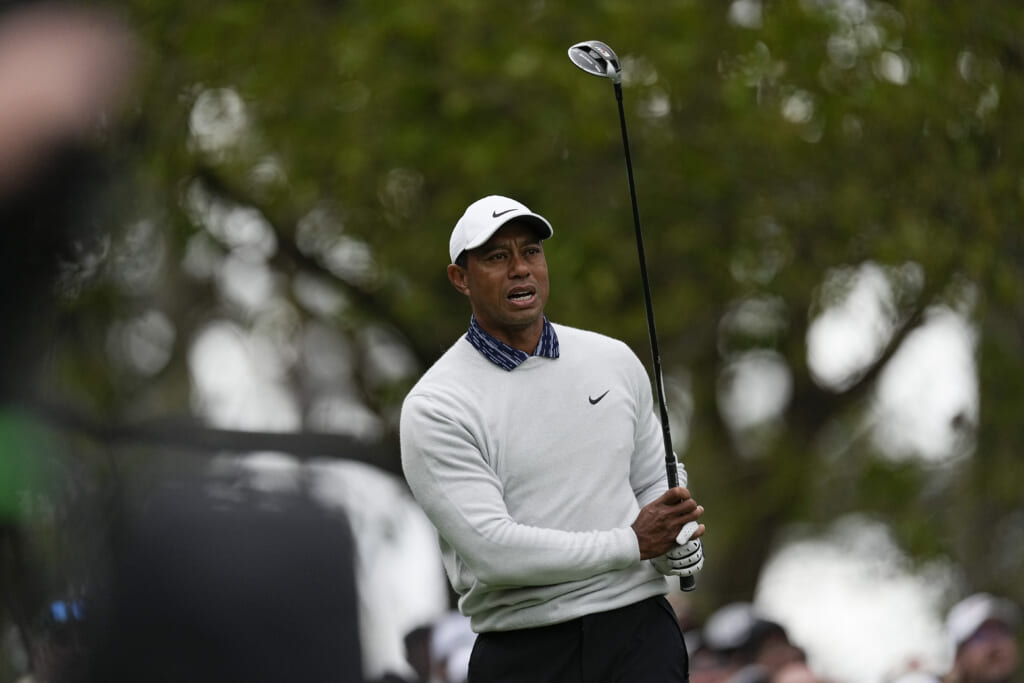 Tiger Woods watches his tee shot on the fourth tee during the third round at the Masters golf tournament on Saturday, April 9, 2022, in Augusta, Ga. (AP Photo/Robert F. Bukaty)

A window that is currently closed for Woods. While it would be easy to call his mere presence in northeast Georgia this weekend a victory in itself considering last fall he wondered if he’d ever play competitively again, Woods isn’t in this to be a feel-good story. He has no interest in being a ceremonial field filler.

His steely 1-under 71 during the first round on Thursday only seemed to embolden him. Following a shaky front-nine 39 on Friday, he recovered to shoot 74 and easily get in under the cutline.

He opened with another sloppy 39 on the front Saturday. And for a few fleeting minutes shortly after he made the turn, it appeared another rally was in store.

A crisp iron to 14 feet on No. 12 and a two-putt birdie at the par-5 13th provided a spark that never became a flame. He bogeyed the 16th and 17th and his approach up the hill to the 18th sailed into the gallery. His bump-and-run caught the slope and kept rolling, with Woods gingerly chasing after it long before it came to a stop nearly 60 feet away from the pin.

Three more putts and his worst round at Augusta was finally over. His 78 was one more than the 77 he put together in the third round of his first trip to Augusta in 1995.

He was an amateur back then, a 19-year-old phenom. Two years later, he was a champion. Two-plus decades later, he is a Hall of Famer and one of the greatest in the history of his sport. He’s also a middle-aged father of two trying to recapture something far more elusive than it used to be.