What’s an NFT? Erika Alexander is using it to urge Black creative control

OPINION: Creator and actress Erika Alexander may have the answer to saving Black art with the afro-futuristic comic ‘Concrete Park.’

In America, Black people are always getting robbed. First, we were stolen from various nations in Africa (yes, POWs traded away count as theft), then our labor was stolen for over 400 years, then our human rights under Jim Crow for another 150 years. When plundering our bodies and labor wasn’t enough, stealing Black art, music and culture became the norm over the last 70 years.

From Elvis Presley re-packaging Black rock & roll in the 60s to New Kids on the Block doing New Edition in white face in the 80s, to Jimmy Fallon allowing white TikTok stars to colonize Black dance moves for a rhythmless nation today, stealing Black art has almost become a rite of passage for many white entertainers.

Which begs the question: Is there anything that can be done to protect Black artists from being perpetually ripped off? Is there a way, in this digital age when everything can be copied, shared and go viral in 5 minutes, that drawings, paintings, even memes by Black creators could be protected — maybe even monetized?

Erika Alexander, best known for her role as Maxine Shaw on Living Single, and co-creator Tony Puryear may have the answer with the afro-futuristic comic Concrete Park.

“What’s an NFT?” I asked Alexander when we spoke last week about her latest project. 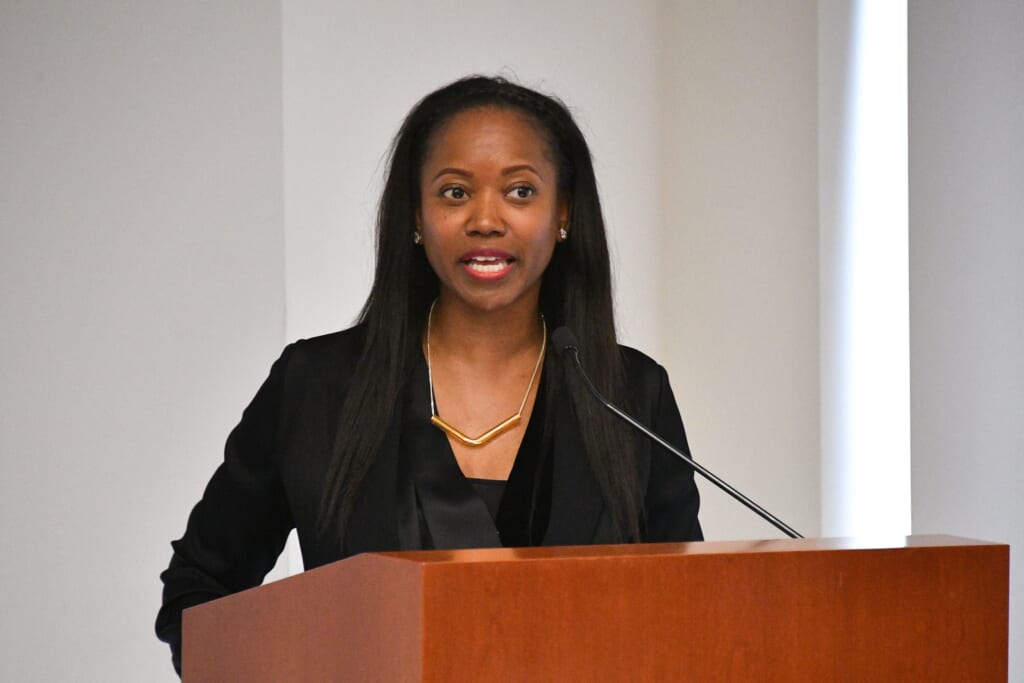 Erika Alexander speaks during the One Fair Wage Event at the Rockefeller Foundation on February 20, 2018 in New York City. (Photo by Dia Dipasupil/Getty Images)

Consumers have always found ways to copy art, from dubbing cassette tapes and VHS to recording a special remix off the radio in the 1990s. Over the last 20 years, the internet has made control of intellectual property almost impossible for creatives and artists. You record a song, you get hacked the song is released online and you get no money. You write a dope script, someone steals it, cuts and pastes it online and you get no money. You come up with a hilarious joke or a brilliant meme, somebody more famous than you tweets it out, they get all the clout, you remain obscure.

Maybe if you’re Kanye West, or Lil’ Wayne or Issa Rae, having songs, scripts and art leaked won’t really put you out, but if you’re a struggling Black artist trying to get ahead, the inability to control and protect your work can be devastating. Now imagine if you could encrypt your digital creations. No one else could take, use or transfer your art without paying you, and the artwork itself always credits the creator.

This means a hot meme could be as valuable as a mint condition Pikachu card. A gif of a classic Kobe Bryant or Michael Jordan game winner could be sold or shared only by people willing to pay to see that moment. That’s what an NFT is, a digital token that isn’t “fungible.” It can’t be replaced, used, listened to or shared by anyone who hasn’t paid for it.

In the case of Erika Alexander, she’s already ahead of the game. Her comic, Concrete Park, is the first Black-owned, Black-created comic to offer NFTs of character moments and events from the book. The work is being offered through the Curio.com, which started off with offering unique NFTs for the hit HBO show American Gods.

The NFT market isn’t perfect, and requires jumping into crypto-currency, a realm that some will understandably find intimidating or confusing. However, for some creatives, the hurdles of learning about Bitcoin or Ethereum or whatever crypto-currency outlet you need in order to make your work available will be worth it, if that means you can monetize your art in a way that isn’t easily reproduced. For some artists, NFTs could be just as important as copyright was almost a century ago.

“[NFTs are] just like [how] the impressionists emerged out of a need to survive and compete against photography and photorealism. The Cubist and abstract movement did the same,” Alexander explains. “Artists like [Andy] Warhol, [Jean-Michel] Basquiat and graffiti artists created their pop and modern art language, cannibalizing and co-opting celebrity and consumer culture. Now, digital art has elevated and transformed pixels into fine art and/or common collectibles.”

So who actually wants to pay for an NFT? Lot’s of rich people apparently. Twitter CEO Jack Dorsey’s first tweet was posted as an NFT and sold for $2.9 million. So while the tweet is visible to everyone today, in reality, this piece of digital history belongs to one collector, and at any point, he could mute it, delete or add the tweet to a digital museum, if he wants.

just setting up my twttr

Kings of Leon released their latest album as an NFT, allowing fans willing to fork over $50 to experience a unique sound, digital art and vinyl experience that fans buying from iTunes or other outlets wouldn’t have access to. Many NFTs are only on sale for a short period of time, raising their potential initial cost and potential resale value.

Erika Alexander and her team released Concrete Park as a graphic novel, in collaboration with Dark Horse, years ago, when afro-futurism and Black sci-fi were still being ignored by gatekeepers in Hollywood. Now?

“Our first sales [for Concrete Park] have been great!” she says. “Our first token (or first NFT) sold out in 60 seconds!”

While NFT may not be able to spread as quickly as free content online, and they require you to delve into the world of digital currency. Any method that allows content creators to potentially control their work more is worth looking into. Imagine a world where viral TikTokers could get paid for their content, where music leaks didn’t have to hurt so much, and where stealing Black art was much harder for the majority.

Maybe then we could care a lot less about what any late-night television host decides to pay attention to.

Dr. Jason Johnson is a professor of Politics and Journalism at Morgan State University, a Political Contributor at MSNBC and SIRIUS XM Satellite Radio. Notorious comic book and sports guy with dual Wakandan and Zamundan citizenship.

The post What’s an NFT? Erika Alexander is using it to urge Black creative control appeared first on TheGrio.