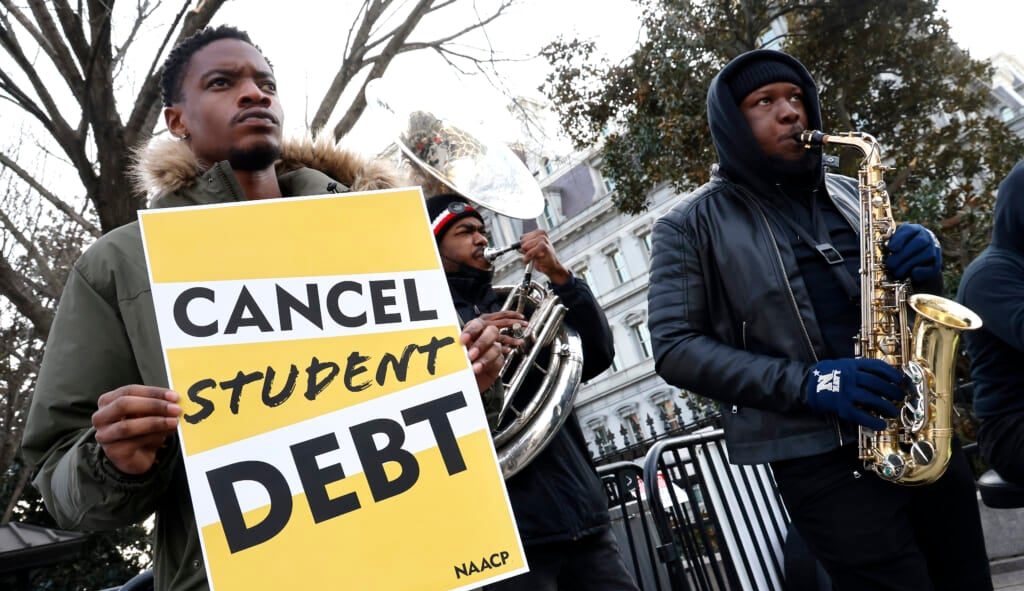 The cancellation would fulfill a Biden campaign promise and could come with additional forgiveness for specific subsets of the population.

The Biden administration may soon announce the cancellation of up to $10,000 in student loan debt for borrowers making less than $125,000 per year. There may be additional forgiveness opportunities for specific subsets of the population, per CNN.

The announcement is expected before the month ends, possibly as soon as Wednesday as the current pause on federal student loan payments will expire on August 31.

As previously reported by theGrio, U.S. Education Secretary Miguel Cardona said Sunday that a decision on the matter would be revealed in “the next week or so.”

Student loan borrowers and the Too Much Talent Band thank President Joe Biden and Vice President Kamala Harris for extending the student loan pause and now demand that they cancel student debt at a gathering outside The White House on January 13, 2022, in Washington, D.C. (Photo by Paul Morigi/Getty Images for We, The 45 Million)

Biden campaigned on eliminating $10,000 in debt per borrower, but has yet to fulfill that promise. However, he has authorized the cancellation of more than $30 billion for borrowers who were defrauded by for-profit colleges or for borrowers who are permanently disabled.

The Brookings Institute notes that regardless of the incomes they make after graduation, Black households carry more student debt, which pushes down their creditworthiness. As a result, Black Americans with student loan debt have lower homeownership rates than white high school dropouts.

Other progressive lawmakers and advocates of cancellation have called for the president to cancel up to $50,000 in debt, however, President Biden has pushed back against that amount.