In a recent interview, Harris dismissed questions about the 2024 presidential election

Whoopi Goldberg took aim at Kamala Harris on The View Thursday over the vice president’s dismissive response to questions about the 2024 election.

In an interview for NBC’s Today Show, Harris was asked by host Craig Melvin whether she’ll be President Joe Biden’s running mate in 2024.

OP-ED FLOATS BIDEN-CHENEY TICKET IDEA: After Vice Pres. Harris was asked about a ‘New York Times’ op-ed that proposed a 2024 ticket between Pres. Joe Biden and Rep. Liz Cheney, the co-hosts weigh in on if it’s just chatter or a plausible pairing. https://t.co/cVclFZyKV0 pic.twitter.com/2qkGmnE1sF

“I’m sorry, we are thinking about today,” Harris said in the interview that aired Thursday.  “I mean, honestly — I know why you’re asking the question, because this is part of the punditry and the gossip around places like Washington, DC. Let me just tell you something: we’re focused on the things in front of us.”

Harris, who is facing historically low approval ratings, was then asked about a recent New York Times op-ed proposing a bipartisan ticket with Biden and Rep. Liz Cheney (R-WY). The former California senator made clear that not only has she not read the New York Times piece, but Harris also said she “could care less about the high-class gossip on these issues.”

In response to Harris’ comments, Goldberg said on The View, “Not only is it insulting but, you know, it’s just crazy. This idea that we have no say over what’s happening like it’s already done and we shouldn’t give a poop.”

Biden said last March it is his “expectation” that Harris will be his running mate when he seeks reelection in 2024.

“The answer is yes, my plan is to run for reelection. That’s my expectation,” Biden told reporters at a news conference but refused to make a definitive commitment.

“I’m a great respecter of fate — I’ve never been able to plan four and half, three and a half years ahead for certain,” Biden said.

The president also praised Harris for “doing a great job” as vice president. 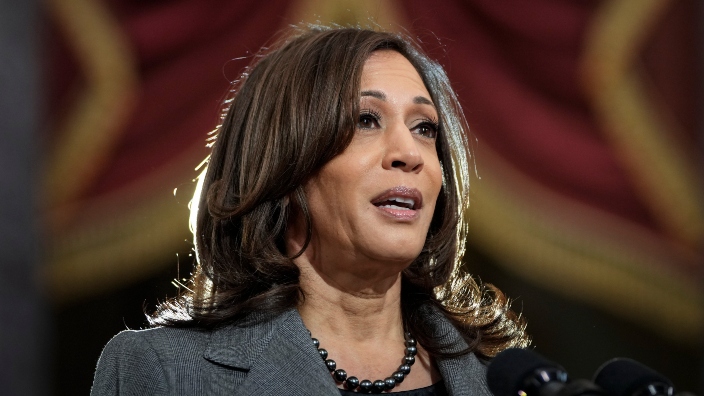 When asked his thoughts about the possibility of Trump being the GOP challenger in 2024, Biden said: “I have no idea.”

“I have no idea if there will be a Republican Party,” he added.

Meanwhile, Trump hasn’t committed to running in 2024 but Lara Trump, the former president’s daughter-in-law, believes Americans are so over the Biden administration at this point that they are “desperate” for a Trump victory in 2014.

“People are desperate to get Donald Trump back in office,” Lara told Fox News’ Fox & Friends on Thursday, Newsweek reports.

The Biden administration has caught some heat over its handling of the COVID-19 pandemic. The global crisis has shut down businesses, created employee shortages, and divided family and friends over the vaccine — not to mention the mounting lawsuits over Biden’s vaccine mandates.

Lara told the Fox & Friends co-hosts that Americans see “how much better things were” when Trump was in office.

If the 2024 presidential election comes down to Trump and former Secretary of State Hillary Clinton, Lara said, “Believe me, Trump versus Clinton, we know which way it’s going to go. It’s going to go for Donald Trump.”

Have you subscribed to theGrio podcasts “Dear Culture” or “Acting Up?” Download our newest episodes now!