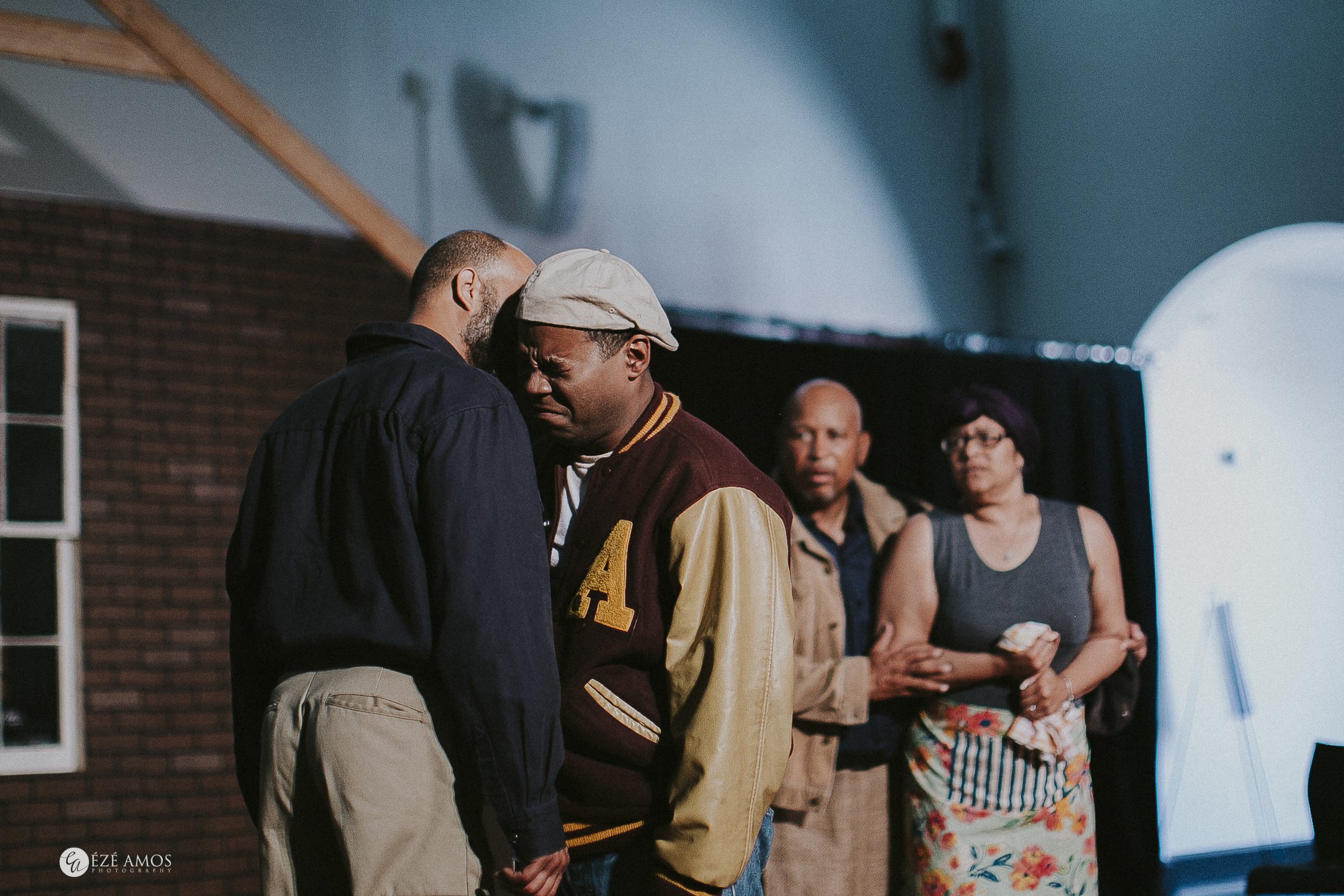 In the 1870s the Jefferson School moved from the Delavan hotel to a new building purchased with funds raised in the African American community and supported by the Freedmen’s Aid Society. At the center of the new structure was a stage where students practiced elocution and presented Christmas pageants. Although from humble beginnings, there is ample evidence that performance was an important aspect of Charlottesville’s African American cultural life. As was the case in African American communities nationwide, the tradition was encouraged by local churches where annual nativity pageants and other opportunities to demonstrate oratory skills, were an essential source entertainment.

With the building of the Jefferson High School, and the inclusion of its stage, performance continued to be vital form of entertainment well into the 1940s. A quick survey of Crimson and Black yearbooks between 1940 and 1951 reveals a strong interest in theater. For instance, in the 1941 yearbook, members of the dramatics club number 59 students and by 1944 interest doubled warranting that the club be organized by grade. In 1951, the last year of Jefferson High School, the dramatics club had a few less members but continued the tradition of successful participation at the Virginia State Theater competition in Petersburg.

Many of those listed as participants in Jefferson’s dramatics club would go on to become members of the Charlottesville Players Guild, an adult group that at the height of its membership, had as many as 40 participants. The group, begun in the mid fifties, performed one and three act plays locally and regionally. They remained a mainstay of local community theater into the late 1960s.

Today, the terrain does not appear as fecund. To get a sense of the state of black theater in Charlottesville, we talked to two leaders in today’s theater scene, Caruso Brown and Leslie Scott-Jones:

Caruso Brown came to Charlottesville twenty years ago and quickly became involved in theater through the drama ministry at Mount Zion First African Baptist Church. When he arrived, Live Arts was a singular source for theater which he continues to frequent. Although the opportunity to view live theater has grown since his arrival, Brown feels that there is a dearth of work that appeals to the black audience. As such, he produces, directs and writes plays that have black characters and are religious or history based; at times, he presents secular plays that have a strong family value message. Because his plays usually are presented at Mount Zion, he is able to recruit actors from the congregation and the house is usually packed. He has also presented work at Live Arts and has traveled the group as far as Maryland. Nonetheless, he still expresses a certain despondency regarding black theater Caruso states that he “doesn’t think it has the draw that he hoped it would.” He suggests that this is owing to the fact that community theater is not viewed as a legitimate form of artistic and cultural expression. His hope is that with continued opportunity to see black plays as well as performers, people will come to understand that theater brings to life the written word. It gives people an opportunity to understand historic moments because they are able to experience the pathos as it is acted out in real time. With more venues interested in representing a broader spectrum of American life, he is assured of the future of black theater. Caruso echoes many of the ideas expressed by Leslie Scott-Jones.

As a student at VCU Jones recalls her professor’s definition of theater. He called it an “imitation of life”. He impressed upon us that “as artists, as directors, actors and designers, we were creating a world. A world that started with the words from the playwright and ended with a performance. He wanted us to understand that everything we created had to be nuanced and intricate. It had to be relatable. Not necessarily real, but believable. For this to be achieved it has to be recognizable to us in some way. It has to look like us, or to talk about us, and it absolutely has to be rooted in the human condition so people who aren’t like us can suspend their disbelief for two hours and empathize with us.”

Over the past six years the six major theaters in the Charlottesville area have produced a total of three shows written by an African American. Does that number shock you? It should. Charlottesville and the surrounding counties combined, according to 2010 census data, is over 70% African American, yet theaters in the area are not representing us or telling our stories. The problem is complex and involved but, when it comes to promoting, and showcasing African American talent in town, most theaters have had issues of consistency and comprehension.

Theater in a small town like our little hamlet is community theater, which is completely dependent on the people who pay to see the shows for continued existence. Unless you have a loyal audience base, who will support you taking artistic chances, and most of the time even if you do, you must carve out a niche for the type of theater you will produce. Deviation from that cookie cutter can be a risk that most community theaters just aren’t positioned to take. To keep the lights on and the water coming out of the faucets, they give the audiences what they want.

The problem with this line of reasoning is it assumes your audience is as well versed in theater and artistic endeavors as the people making it. You give them what they want so they buy tickets or donate. When do you challenge them? When do you ask them to think? When do you tell them the story they may never hear? When do you show them a life they will never live, and ask them not only to accept it, but empathize with it? That is what art is supposed to do, in small and grand ways it is supposed to move you. It is supposed to induce a visceral reaction as complicated and beautiful as our everyday lives. That can’t be achieved without allowing all members of the community to speak their truth, tell their stories, and create something completely indigenous to them for consumption by, and comprehension of, the entire community.

Black theater. Theater written and performed from the black perspective is what’s missing from the artistic community in Charlottesville. Alice Walker said, “If art doesn’t make us better, then what is it for.” This community has suffered for it, without any realization of the suffering itself. The notion that there is no audience for black theater in Charlottesville has been disproved by the recent success of Fences by August Wilson at the Jefferson School African American Heritage Center. Over six performances more than three hundred people attended the show. For a show inside a venue new to live theater, that is an outstanding first showing. Comments from audience members add to the praise. The center means to top that with plans to produce all ten of August Wilson’s Pittsburgh Cycle over the next five years. The next production, Jitney, is planned for an opening mid-September. The landscape is changing, black theater has arrived in Charlottesville.