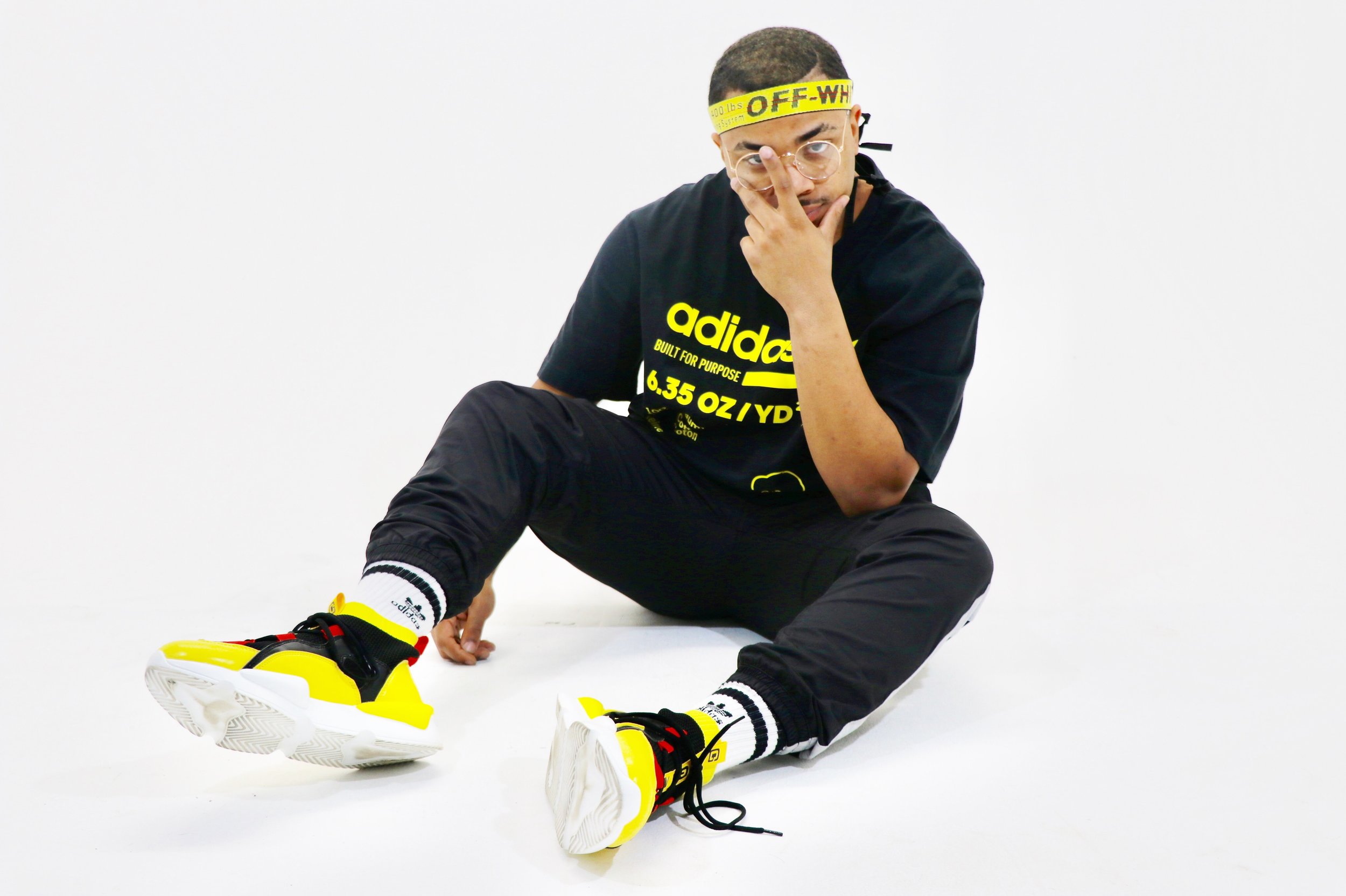 So even before I could get out my first question, he interrupts me and asks in a shy but abrupt way, “So do you want to hear about Malcolm or do you want to hear about Waasi?”  He asks the question as if I should brace myself if I really wanted to learn about Waasi. He gives one of those Kawai Leonard laughs and says, “There’s a major difference between Waasi and Malcolm.”

In Swahili, the word waasi means rebel or rebellious one. “I’ve always been kind of weird. You know, I was into Anime (Japanese inspired animation and cartoons).  While most of the people in my generation were in the house playing video games, I liked to be outdoors. I lived in an imaginary world.  I’m the type of person who thinks outside the box. Shit, I wore skinny jeans before people started wearing skinny jeans,” said young Waasi.

Brother Waasi goes on this short soliloquy to qualify the fact that he is at heart a rebel—in every sense of the word.  I mean just follow his music and his artistry.  It’s hard to categorize him. He just doesn’t fit into the boxes that we typically want to fit artists into. As music connoisseurs, we always want to be able to put certain artists into categories of where they fit, but Waasi doesn’t fit.

Waasi doesn’t fit, and from what I gather from our conversation, Waasi has no desire to fit.  Waasi presents himself as something otherworldly. From the blonde hair to the skinny jeans, to the piercing but star-gazing look, this kid is from another planet, and he knows it, and what is more, he embraces it.

I couldn’t help but keep hearing the Nina Simone song ‘Misunderstood’ in the back of my mind during the interview.  Waasi kind of put me in that frame of mind, so I asked him, ‘How have you dealt with being misunderstood?’  He paused for a moment to collect his thoughts. It seemed like somewhat of a sobering moment.

“It was hard at first.” (Long pause.) “Regardless of what you do, people are going to have something to say,” he replied as he collected his thoughts.  He goes on to say some of the most tweetable -ish I’ve heard in a minute, “The best way to be relevant is to be who you are. I’m not trying to fit in.”

Waasi has developed a growing audience and following for his music over the past year or so. His mixtape from January of 2018 ‘BETTERDAZE’ has more than 30,000 plays on Sound Cloud, with listeners from all over the world.  His sound has that type of reach that doesn’t say, ‘local rapper’. It says this kid Waasi is something Charlottesville should support to the fullest and make sure this winged creature flies and carries us along for the ride.

The signature track on the mixtape was ‘Groovin’ which is accompanied by a video that displays two components of the hybrid culture of Charlottesville—rugged urban hip-hop culture and frat boy post-adolescent foolishness. It’s a sound that is somewhat Chicago house music but at the same time distinctly Charlottesvillian. Outfitted in his ‘Dreamin’ Diamonds’ t-shirt, Waasi presents himself as one who is deeply rooted but ready to grow and go far and wide.

So inevitably the question for many of us is, ‘Well how in the world did Waasi get into this music thing?’  Well, it turns out that in his eclectic individuality, brother Waasi is also a poet.  “I started writing poetry in middle school, but I hid it from everybody. I didn’t tell anyone. I didn’t even let my family know,” Waasi revealed.  Most of his poetry was about himself. Poetry, as he puts it, gave him the ability to self-reflect and actually notice his own existence.

“Poetry helped me to be comfortable with myself,” Waasi emphasized the point that his aim is to help people and to motivate them to comfortable with themselves. “I want to inspire people to take their negative thoughts and hesitations and just go do what brings them life,” Waasi spoke of how he saw a lack of individuality and how there is a lot of copy-catting going on. To illustrate, Waasi said, “You see those face-tat rappers. It got played out fast, but everybody was doing it.”

When many people who aspire to be rappers are more concerned about money or fame, Waasi has a different motivation for being successful, both as an artist and financially.  “I watched my parents struggle and still make shit shake. I want to do the same for them.” Waasi at this point in the interview delves deep into how family and friends are his motivation.  He goes on to discuss how he wants to provide a life for his three siblings so they can live comfortably. He by reflex delves into a lyric from his ‘BETTERDAZE’ mixtape and says, “The outcome is going to be amazing.” Waasi is adamant that it’s not about him; he just wants to put the people around him in a better position. I could only respect the young man for this. This is the type of energy we should definitely be supporting.

When I asked him about his top five all-time artists, he quickly stated Andre 3000, Kendrick, Kanye (the old Ye’), J. Cole, and of course Hov. Of Jay-Z, he said, “Hov is living proof that a young black man who started out hustling can use art to turn his life around and put the people around him in a better position.”

When I asked him who he’s listening to today, he definitely checked me on my contemporary hip-hop knowledge. Waasi was like, “How you don’t know who Smino is man? Smino stands out from everybody.”  He keeps spitting, “Yo, you heard of Jid from Dreamville, right?” I try to pretend like I’m hip. But he knows I’m not.  We laugh.  I’m impressed by his range of knowledge about hip-hop and music in general. Waasi is obviously a student of the game and is on his way to being a major player.

I nearly forgot before we finished to ask him about Malcolm. “Malcolm is an overall nice guy, you know.” He presents Malcolm as an unassuming and laid back person. “Waasi is Malcolm’s outlet to express himself.” He goes on to say that there is nothing fundamentally wrong with Malcolm, but Waasi’s rebellious nature gives balance to Malcolm. “We were just kids beating on the lockers and lunch tables at AHS (Albemarle High School) and MHS (Monticello High School) and battle rapping and what not, and that gave birth to Waasi.  I would be in the music studio all day at MHS, even afterschool becoming Waasi, the rebellious one. Malcolm and Wassi want the same things. They want people to just be free to be themselves, but they just go about it in different ways.”

Waasi’s new video will premiere on YouTube on February 14th called ‘YOUANDI’ and promises it is going to be one of a few of his visuals that will change the game. Check out Waasi’s catalog on SoundCloud follow him on Instagram @itswaasi. After talking to this young man and seeing the depth that is within him, I’m convinced that Waasi’s rebellion is one that we should join.