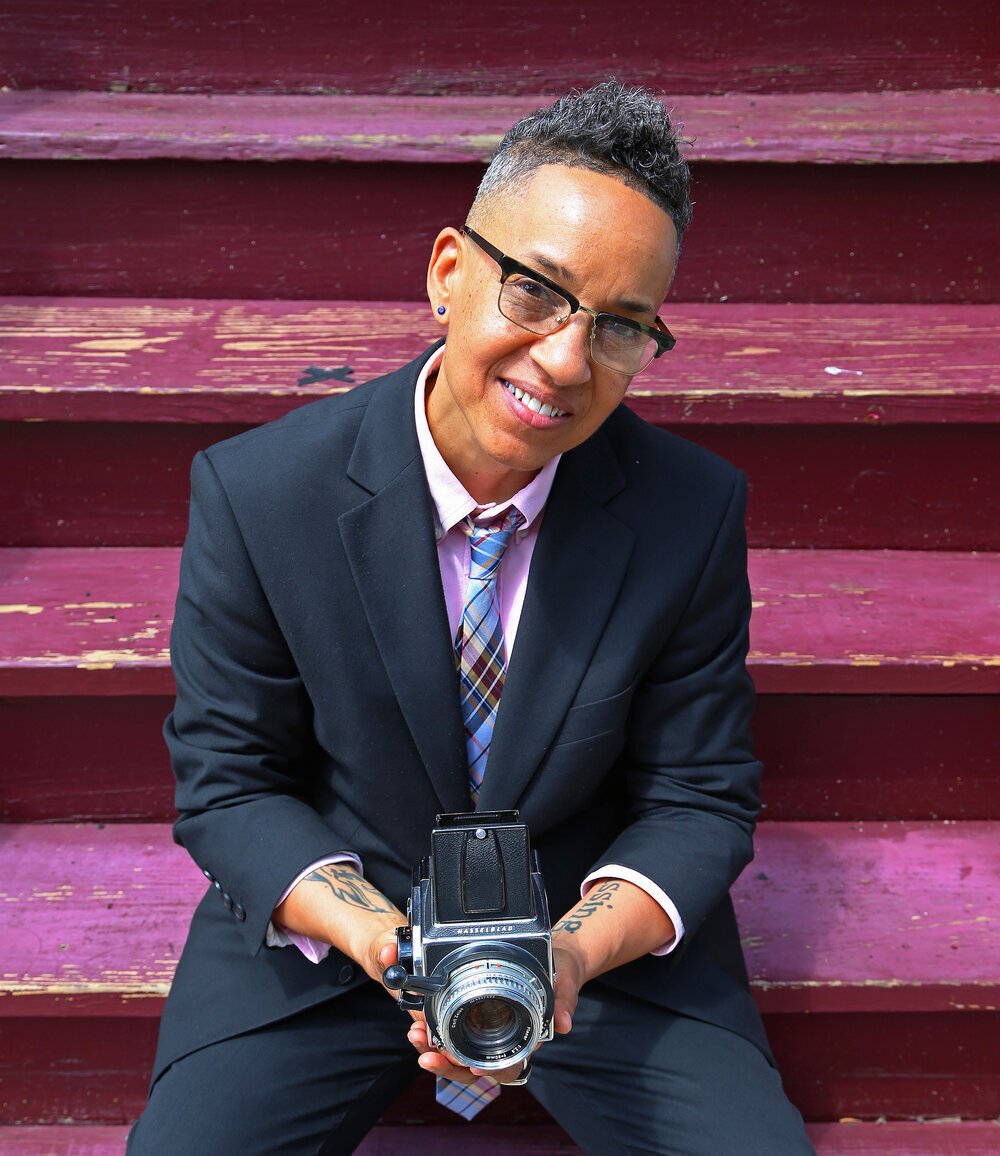 Much of Lola Flash’s work takes a come-as-you-are approach to challenge traditional beauty standards and gender norms. Flash uses her work to create striking images that spark conversations about stereotypes surrounding race, gender, sexuality, and identity. As Flash told Gallery Blue Door, “My projects are an insiders’ account of the many ways Black and gay people are perceived and how selected images have affected our psyche.”

Lola Flash is a New York-based image-maker and gay rights activist committed to amplifying the work, struggles, and beauty of the LGBTQIA+ community. Many of Flash’s creative works focus on portraiture and has been featured in various exhibitions worldwide and multiple publications, including an article in the New York Times. Flash currently works as an artist and teacher in the US and UK, whose diverse background privileges and unique perspective translate into her work.

Flash first became well-known in 1989 with her feature in “Kissing Doesn’t Kill,” a political art action that documented ACT UP’s work to raise awareness and challenge stigma about AIDS. Since then, Flash’s work has been featured in galleries worldwide–from the Albert Museum in London to Brooklyn Museum. Later this month, Flash’s exhibition “SALT” will be featured at the Jefferson African American Heritage Center as part of the series “Seeing Black: Disrupting the Visual Narrative.” This series aims to amplify community work and art from renowned Black creators and local leaders. 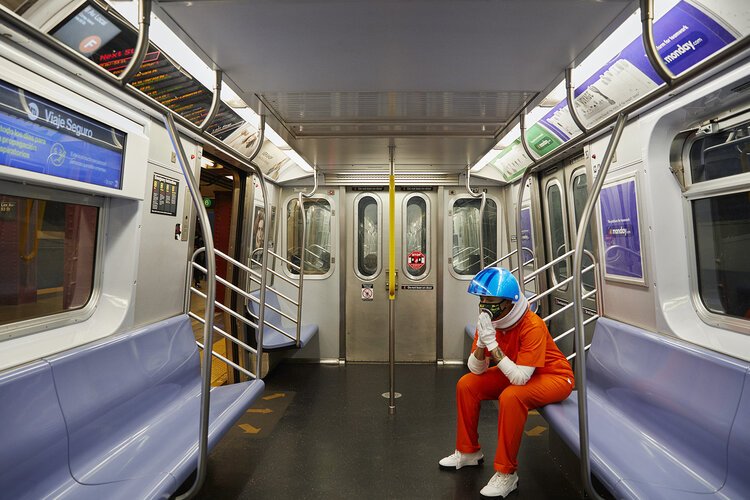 Media representations of Black people across the diaspora are often created by white men. Racial barriers exist for Black creators across the board, meaning that the images, video, and content we consume are usually controlled by predominantly white gatekeepers. The “Black experience” that is vast, robust, complex, and substantial gets dwindled down to caricatures and stereotypes, perpetuating harmful stereotypes about Black people. Flash’s work challenges these stereotypes. In her series, “SALT,” Flash captured images of Black women over seventy who remain active in their industries. Each portrait features powerful women who have accomplished great things in real estate, activism, art, and design. These images challenge the norms around gender, sexuality, aging, and identity and disrupt how ageism is presented in popular media.  Positive representation of older women and femmes–especially Black older women and femmes–is not seen outside of harmful tropes attached to shame and fear of aging. “SALT” increases awareness around ageism in society and counters the notion that vibrancy is only for the young. 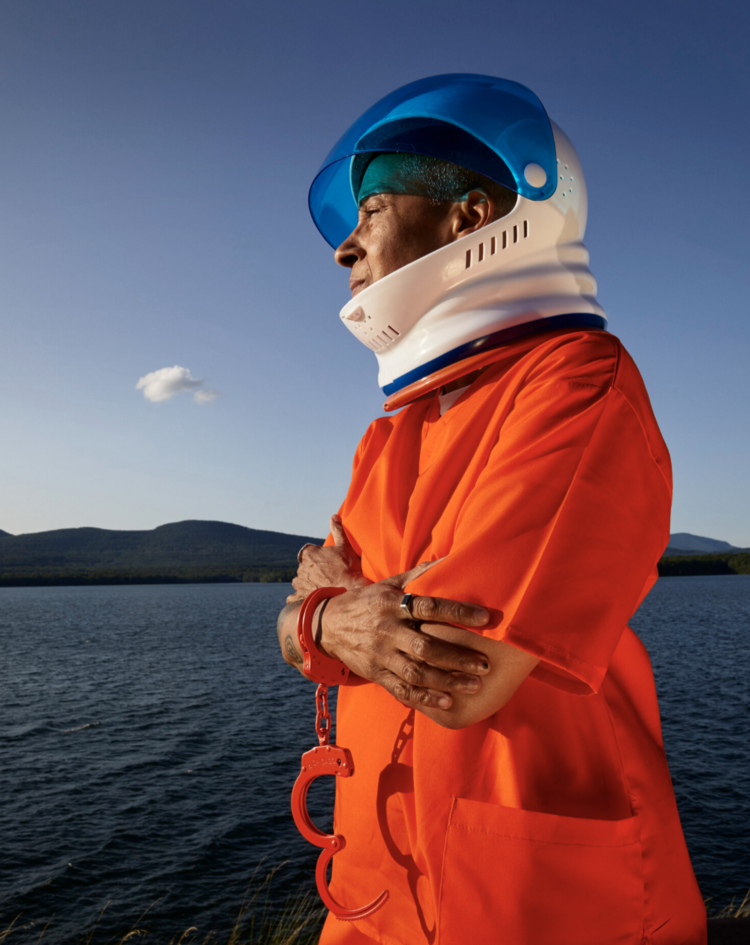 Flash’s subjects are portrayed in classical poses in their homes, which evoke a sense of power, poise, and vivacity that challenges profoundly rooted ageism and disrupts the young/old binaries. “This series aims to combat the invisibility that some older women experience, and to highlight the deep-rooted cultural and societal biases that remove older women from the public sphere,”  says Flash on her website lolaflash.com. Each subject brings her own flair and personality to each striking image. In her artist statement on her website, Flash says, “I believe that this process conveys the importance of the sitting to the subject, and yields a truer image, transmitting the energy, spirit, and seriousness of both the women and this endeavor” (lolaflash.com). 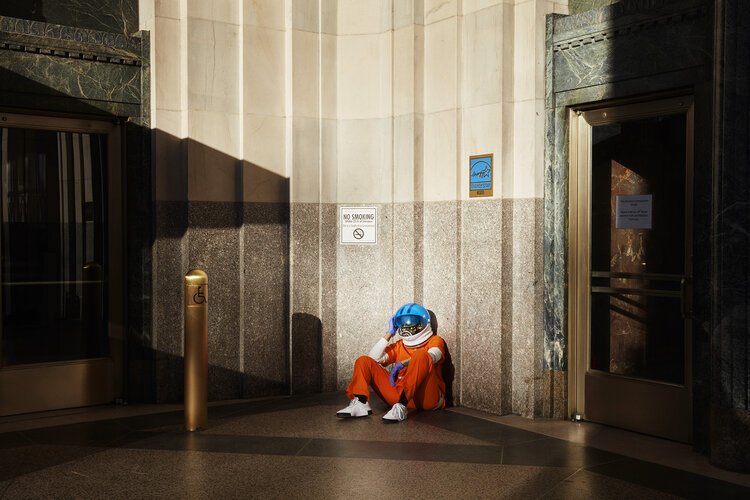 Hailing from New York, it may come as a surprise to know that Flash has familial ties to Charlottesville’s Charles H. Bullock, a prominent community leader in the early 20th century, and Flash’s cousin, Edwina St Rose, spearheaded the Preservation of the Daughters of Zion Cemetery project. From her various works that address LGBTIA+ rights to AIDS activism, Lola Flash is a photographer you need to know.

“SALT” opens on October 17th at the Jefferson School African American Heritage Center with a virtual reception at 6:30 PM. This reception will be followed by a virtual conversation between Flash and writer Jessica Lynn at 7 PM.