Everybody Loves Chris: A Conversation with Comedian Chris Alan

For many of us, when we think of Rochester, New York, we think of it as the home of Kodak (not that one), Xerox, and of course Wegmans. Yet for folks like comedian Chris Alan, it is also known for being a very divided city along racial and economic lines. Chris noted the array of fancy grocery stores in Rochester but half-laughing says, “Yeah, but they also lock the crab legs up in those grocery stores.” At this point, I’m already laughing at not only the joke but the insightful social commentary that comedian Chris Alan offers.

Growing up in Rochester was often dramatic and traumatic for Chris. “I was a smart kid, but I couldn’t fight,” he said. Chris admits of getting beat up—often. “I was never the cool kid. I would lash out with my tongue.” Chris went on to describe how he couldn’t fight to save his life, but his ability to brutally insult others was vicious and often served as his only defense.

In many respects, Chris’ upbringing was different from many of the kids in the neighborhood though. “They used to call my family the Black Griswolds,” he said. Chris’ family was intact with both parents and offered some things that many of his other peers didn’t have. While they went to public school, Chris begrudgingly admitted, “I went to private school and had to wear a uniform. I got teased for wearing it—a lot.”

What saved Chris was probably the fact that he was quick-witted, deflective, and mastered the art of making fun of himself before others could. “It was hard for people to make fun of me because I had already made fun of myself,” he said. It was surely great training for a comedian and falls right into the narrative of many comedians who became funny to save their own selves.

For Chris, his life as a stand-up comedian is something of a second act. What many may not know about Chris is that he recently retired from the United States Air Force settling in the Charlottesville area. It offers his personal story balance in some respects and disarms folks who see him as just another person who has failed at life and is now trying their hand at comedy. Chris, in many ways, has made all the right moves and finds himself in a good space, young, black, retired and living his dream.

“Making people laugh has always been something I’ve been told I can do,” said Chris. Equipped with a quick wit and the ability to capture people’s attention—quickly—is why Chris is able to make people laugh. Chris sees being a comedian as being in a special class of people in society so to speak. He says, “If I wasn’t into comedy, I’d be a chef in somebody’s kitchen.” He went on to talk about how both require prep and timing and says that, “The social outcasts of the world are in comedy and in the kitchen.”

Chris credits his mentor, Vince Morris with being his first teacher and helping him to understand how grueling the road is for a comedian. “Vince taught me that being on the road is not as cool as it looks.” He spoke of getting $600.00 to do a show in which $200.00 went to a flight, $300.00 to the hotel and not to mention buying food. Chris admitted he had to ask himself, “Did you really make any money?” Not to mention how lonely it can be for a comedian out on the road.

Being a comic certainly has its strains on family. Chris has a wife and an elementary school-aged son.  “My wife is open to me being gone,” he says. He goes on to discuss how his wife, Khalilijah has a frame of reference because she herself is a performer and her father was an activist and actor. “Being in this industry, there are traps; but she trusts me,” he said, and goes on to talk about how his mission is to keep that trust unwavering. 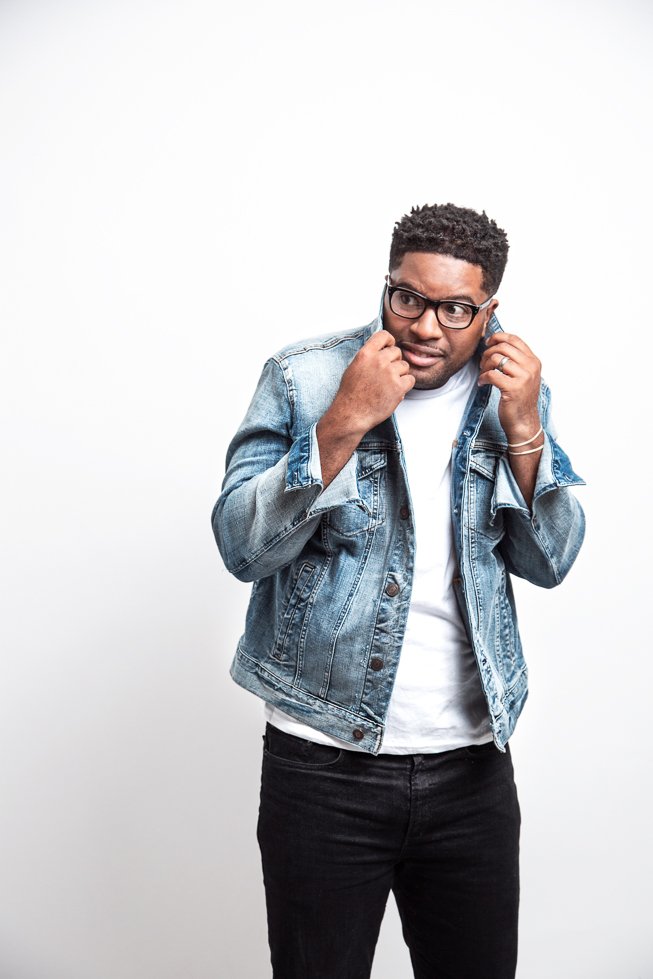 The grind began to inevitably pay off for Chris. I asked him about what makes him hopeful about the profession and what keeps him going. “I got to open for Mark Normand and Amy Schumer.” Mark Normand has appeared on Conan, The Tonight Show Starring Jimmy Fallon and The Late Show with Stephen Colbert. Of course, we know Amy Schumer, famous for her role in the movie Train Wreck, who Chris opened up for in his hometown of Rochester. “I did five minutes in front of 10,000 people in my hometown.” This is when Chris knew he was truly a professional in the craft of comedy. It was personal. All of the struggles that he had in his hometown of trying to solidify and secure his identity had seemed to all come together at that moment. “I cried in the back,” Chris said with the feeling of reaching a height in life that is only done through an unusual belief in self and dedication. This is where opportunity met him.

As Chris continues to travel the comedy circuit and becomes known far and wide, I asked him very simply, ‘What’s the dream?’ “I want to write on a show. I want to be touring and working as a comic,” he said. To Chris though, it’s about much more than being a comic. It is about having a voice and a perspective. “I want people to want to hear my opinion. I want people to want to know my views on certain issues.” Chris goes on to give a list of comics he respects such as Dave Chapelle, DL Hugley Whoopi Golberg, and Bill Burr and says, “People not only care that they are funny, they care what these people think. Comics have the ability to see all the angles. The other perspective might be more funny than how I feel, and it’s just comedy.”

To keep up with Chris as he continues to rise in the world of comedy follow him at @chrisalancomedy on Instagram or on his podcast called Negro Please Radio on all platforms. Chris recently released a comedy album called ‘Off Script’ which can be purchased and streamed on all platforms also.